The touching reason this couple got married at hospital 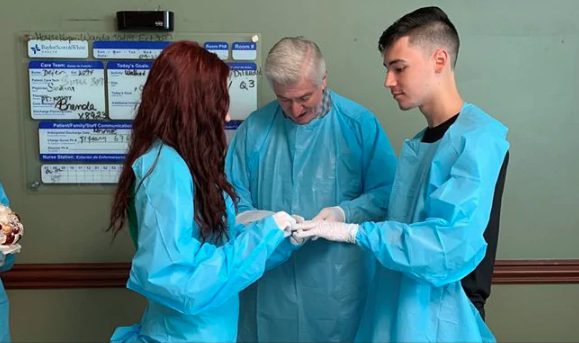 Aaliyah and Michael Thompson of Texas, USA, had delayed their wedding three times since they got engaged. The couple was intent on getting married on September 21, reports People.

However, before the big day arrived, Michael Thompson received a call saying his father had been admitted to Baylor Scott and White-Sunnyvale.

William Thompson developed sepsis due to a complication with diabetes and needed to have an emergency operation, followed by weeks of recovery.

The couple knew they could not get married without him, so they dropped everything and brought the wedding to him.

"I told him, if your dad has surgery, there is no way that they are going to let him out for the wedding so we talked and discussed it and that's when we decided if he can't leave, then we go and get married in front of him in that hospital room," Aaliyah, Michael's now-wife said to NBC News.

"We were originally just going to do something really small. It was going to be just us, the family and him. Then the pastor came in and she's like, 'Hey! I got some nurses and the doctor coming out with a diabetic friendly cake and everything.' Yeah, it was pretty cool," Michael said.

The couple says that William Thompson was happy to be able to witness the ceremony. "He kept smiling. He was just really happy," Aaliyah said to NBC News.

The couple also had a traditional church wedding after the ceremony at the hospital.