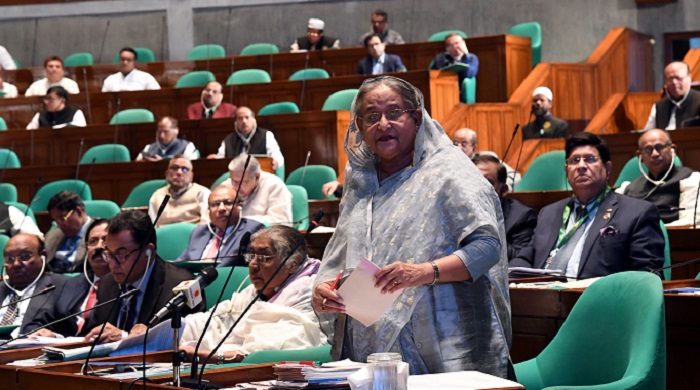 Describing the signing of the memorandum of understanding (MoU) with India on sharing the water of Feni River as a “temporary arrangement”, Prime Minister Sheikh Hasina on Wednesday said Bangladesh has inked the MoU on humanitarian consideration.

The premier came up with this statement while replying to a starred question from Jatiya Party lawmaker Moshiur Rahman Ranga (Rangpur-1) during her question-answer session in the House.

“In October last, we’ve signed a MoU with India on withdrawing of 1.82 cusecs of water from the Feni River to supply drinking water for the people of Subroom of Tripura State,” she said.

The Leader of the House said the total length of the Feni River sourced from the bordering areas of Tripura of India and Khagrachhari of Bangladesh is 140 kilometres.

Of them, she said, 94 kms are flowing along the borders of the two countries, while rest 46 kms have fallen into the Bay of Bengal after being flown through Bangladesh.

Sheikh Hasina said the MoU is a temporary arrangement that will be implemented in seven conditions.

“The issue of 1.82 cusec drinking water mentioned in the MoU will be adjusted later by including it during the signing of the agreement on water sharing of Feni River,” she said.

In this connection, the Leader of the House said Bangladesh and India agreed on lifting 1.82 cusec water from the Feni River for supplying of drinking water to the people of Sabroom town at the water resources secretary-level meeting held on January 4-5 in 2010.

“The Joint River Commission (JRC) in its 37th meeting held in March in 2010 expressed satisfaction over the decision,” she said.

The premier said later a decision on setting up low lift pumps for supplying drinking water on seven conditions was taken in the technical-level meeting of the JRC in 2012.

The conditions are the wideness of the launching approach will be 4.50 meters instead of 7.65 meters and Bangladesh could supply the pumps after finalisation of their characteristics.

The amount of water to be lifted from the Feni River will not exceed 1.82 cusec in any way which will be monitored regularly by the concerned chief engineers of the two countries and they (chief engineers) will examine the capacity of the pumps after their installation.

The pipe through which the water will be supplied to Sabroom of Tripura will not be more than one and the concerned chief engineers of the two countries will jointly fix the position of the “intake well”.

“If erosion takes place on Bangladesh side of the Feni River opposite to the intake well, the Indian side will implement the river bank protection work of that part,” she said.

The prime minister said the government has no plan to export natural gas to the northeastern states of India. “Our government has taken various steps to ensure energy security in the country in consideration of the highest priority,” she said.

Sheikh Hasina said she along with her Indian counterpart Narendra Modi jointly inaugurated the activities of export of bulk LPG to Tripura of India.

“Through it, our private business firms could make profit by exporting imported LPG after filing it in the cylinders,” she said.

As a result, she said, there will not be any problem of creating energy crisis, rather it has opened up another field of fetching foreign currencies.