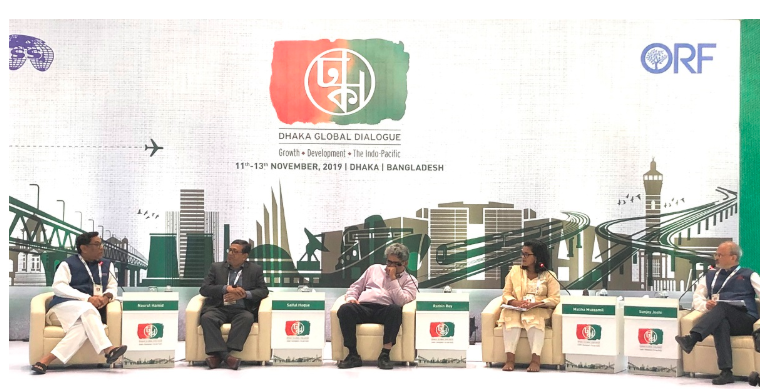 State Minister for Power, Energy and Mineral Resources Nasrul Hamid has said they have reviewed the country’s power generation plan to reduce the stake of coal-fired electricity to 30 percent from 50 percent.

“Through the review, the share of renewable energy and regional power through import was set at 10 percent each,” he said while addressing the Dhaka Global Dialogue at Dhaka InterContinental hotel in the city on Tuesday.

Observer Research Foundation (ORF) of India and Bangladesh Institute of International and Strategic Studies (BIISS) jointly organised the function which was also addressed by Saiful Haque, director of Institute of Energy, University of Dhaka, Rathin Roy, director of National Institute of Public Finance and Policy and Maliha Mufazzil, researcher of Environmental Change Institute of Oxford. Sunjoy Joshi, chairman of the ORF, moderated the dialogue.

The state minister’s remarks came against the backdrop of a speaker’s comments on the report that the country has been implementing 29 coal-fired power plants which will severely pollute the environment.

Nasrul Hamid also termed the report on 29 coal-fired power plants untrue, saying there was a plan that 50 percent power generation will be coming from coal and remaining 50 percent from gas and other sources.

“But two years back, the power system master plan (PSMP) was reviewed and the share of coal-fired power generation was reduced to 30 percent from 50 percent. The share of regional power was increased to 10 percent and also the stake of renewable energy was set at 10 percent in the revised plan,” he said.

The state minister said the country has no enough gas to produce entire electricity. “So, we have to import gas as two sectors are heavily dependent on natural gas—industry and power,” he told the audience.

He, however, said the power system master plan can be changed further if required as the technologies are changing in the power generation.

Saiful Haque said the renewable energy has now many sources as photovoltaic solar power is not the only option. “Even solar power is being produced from different options and models,” he added.