Lessons from Cyclone ‘Bulbul’: Views from the Ground 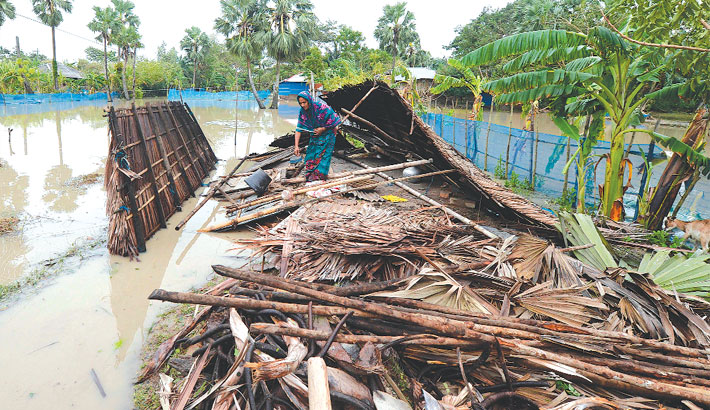 At least four people have died and nine injured due to the impact of cyclonic storm Bulbul in Bangladesh. Thousands of houses were damaged while trees were uprooted during the cyclone. The powerful storm also destroyed crops and damaged embankments in the coastal districts. The quick estimation says the powerful storm destroyed 47,000 houses, damaged croplands, shrimp enclosures, and uprooted trees in different upazilas of Satkhira district. Uprooted trees cut off road communications in different areas where power supply has remained snapped in those areas. Most of the low-lying areas in the districts went under water due to torrential downpour triggered by the storm. Troops were sent to coastal districts while at least ten thousands volunteers went door-to-door and used loudspeakers to urge people to evacuate their villages. However, the relevant authorities are yet to get complete list in this regard. Different sources confirmed at least one million people living in the coastal belt have been evacuated. The cyclone crossed Khulna coast at around 5am on Sunday with a heavy precipitation, flooding low-lying areas in the district.

Record numbers of people have been sheltered along the coast. Around one million people have been sheltered in many places including cyclone shelters (designated school buildings), government offices, UP buildings, offices of different NGOs. The success of all of the programmes taken in recent past has come into a good result. The massive programmes taken to raise awareness in the community, the thousands of volunteers including government recognised Cyclone Preparedness Programme (CPP) active along the coast, continuous services from community radio and the use of mass media. As most of the school buildings in the area were used as shelters, coming back to normalcy may take some time. In many areas, the approach roads to the schools were inundated, the ground floor of the shelters were mainly used for shelter of domestic animals and this led to the buildings being unusable for weeks.

However, the overall preparedness during the time of ‘Bulbul’ have shown the readiness of the country in dealing with natural disasters, particularly cyclones. As a result, the damage was not as bad as was expected while Sundarban – the world’s biggest mangrove saved the life of the coastal people for another time.

However, the ‘story’ was not that easy on the ground. Despite all the preparations there were still many gaps found, and many issues raised during the response. The volunteers and staff members deployed for the response by an USAID funded project named Nobo Jatra witnessed numbers of improvement areas. They include a lack of coordination among public entities and NGOs, unavailability of shelters, a lack of awareness raising materials and the capacity of our volunteers. Upgradation of the disaster management committees at union and Upazilla, clear explanation of 10 signals will include to the list. This brought into question our actual disaster preparedness and the modernisation of the Cyclone Preparedness Program (CPP) considered crucial for cyclone emergency management.

During cyclonic storms, taking shelter at safe, designated buildings is the ultimate preparedness measure. In the 13 coastal districts of the country, around 4000 shelters have been constructed over the years while the government will build 752 more cyclone shelter centres in the country’s coastal region and disaster-prone areas aiming to minimise the loss and casualties of natural disasters. Unfortunately, a significant numbers of shelters are not usable due to a lack of proper maintenance. In every shelter along the coast, around 2,000 people were accommodated at each during disasters even though capacity is 200, at most. This has given the nation a clear understanding that the number of shelters is not sufficient in comparison to the population living in the endangered zone of the country.

During natural disasters, there is a common complaint against coastal people that they refuse to leave their belongings, and domestic animals, behind. This was also true during Bulbul response. It has been empirically shown that robbery rises during times of disaster; so male family members often choose to stay behind in their homes. This leads to more casualties. The best way to minimise this effect would be to increase the numbers and size of "killas"(high raised and mud built area for keeping the animals in shelter) that adjoin cyclone shelters. However, the accuracy of forecasting has become an issue in last two disasters. The cyclone ‘Fani’ also was shown signal number 10 while the storm did not hit as expected which demotivates people to get shelter in immediate next disaster.

Last few years, Disaster Risk Reduction Programs have been taking place along the coast. Megaphones, first aid kits and search and rescue materials have been provided to the Upazilla and Union Disaster Management Committee, schools and some community level organisations. These materials were very useful although their supply still turned out to be insufficient with regard to the needs of the population during, and following, Bulbul. When disasters actually happen, CPP volunteers and the Disaster Management Committee in the districts, upazilas and unions become active, but the committees even do not meet on a regular basis, and most are no longer properly certified. As a result, there is a lack of overall coordination during disasters.

Again, the traditional signaling system was used despite the development of newer, more effective systems. In addition, most people do not know what signal four even means. The traditional signaling system (comprised of 10 signals) was developed by the British and we are still using it. What we need is a people oriented signaling system, and as was mentioned earlier, one has been developed. The reason it is not still used is because enough initiatives were not taken to familiarise the people to the new system. If we rise to signal 10 directly from 4 then what is the point to have the numbers in between?

In the past 25 years, a total of 135 million people have been affected by different disasters, out of which 16,513 lost their lives. The total amount of resulting economic damage was USD11.7m (EM-DAT). In 1970, a severe cyclone took a toll of 0.3m, while the toll was 0.14m in 1991. In 2007, "Sidr" hit the coastal belt of the country affecting all the 32 districts and around 4000 people died, that number dropped to 300 by the time "Aila" rolled around in 2009. Although cyclone "Mahasen" damaged a lot of crops, the number of casualties was a lot lower than previous disasters. The Bulbul shows that total damage from natural disasters in Bangladesh has significantly decreased over the years.

All this happened through initiatives taken by the state and NGOs. Policy formulation to ground level implementation, along with a rise in overall awareness among communities, the positive role of media and community based organisations were all factors in improving our preparedness and management. Hopefully, we can continue to harness these initiatives and continue improving our record.

The writer is the Director – Program, Policy and Advocacy, NoboJatra Project in World Vision Bangladesh.