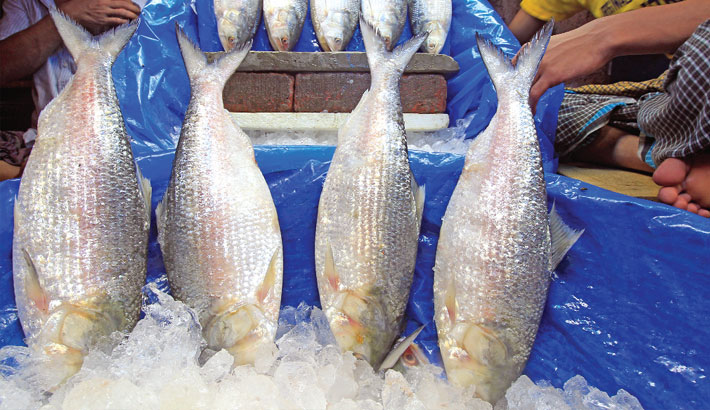 A boon in Hilsa production might net over 5.17 lakh tonnes this year as a large number of mother Hilsa released eggs, thanks to favourable weather conditions and a 22-day ban on catching, selling, hoarding and transporting of the national fish.

If 40 per cent of the eggs had produced juvenile hilsa, the production may exceed last year’s output, said the scientist.

He said a mother hilsa approximately releases a minimum 10-12 and the maximum 21-25 lakh eggs. If 40 per cent of the eggs could be fertilized then 8 per cent juvenile hilsa will be produced.

If the 8 per cent of juvenile hilsa could be saved from netting than the 33,600 crore juvenile hilsa may increase the country’s total hilsa production.

Last year, around 47.74 per cent of mother hilsa have released eggs that increased the gross production of Juvenile Hilsa.

Hilsa moves from coastal areas to the Padma and Meghna rivers to lay eggs around the first full moon of the Bangla calendar month of Ashwin.

In the past few years, the fishing ban has successfully sustained the Hilsa and fishermen catches huge hilsa this year and the last couple of years.

Anisur Rahman said a large number of hilsa travel Kushtia, Rshshahi and other upstream areas this year due to ban and huge current and water flow on the river of Padma.

The king of fish is changing its migration route. Faced with a mesh of nets at the mouth of the Hooghly and a highly silted riverbed, shoals of hilsa are taking flight to Bangladesh, reported the Times of India on Sep 23, 2019.

That is one of the main reasons why the hilsa catch in Bengal’s rivers in India is drastically declining, pushing up prices, say experts. In 2002-03, the total hilsa catch in the Hooghly was 62,600 tonnes, the report said.

The hilsa stock that congregate in the north Bay of Bengal mainly takes three routes for their upstream journey during the spawning season: the Hooghly estuary, the Meghna in Bangladesh and the Irrawaddy in Myanmar. But, due to high siltation and virtually unrestricted fishing in the Hooghly, the fish has been changing its migration route and is moving up mostly through the Meghna.