Fugitive asks cops to add costume to his pic, they oblige 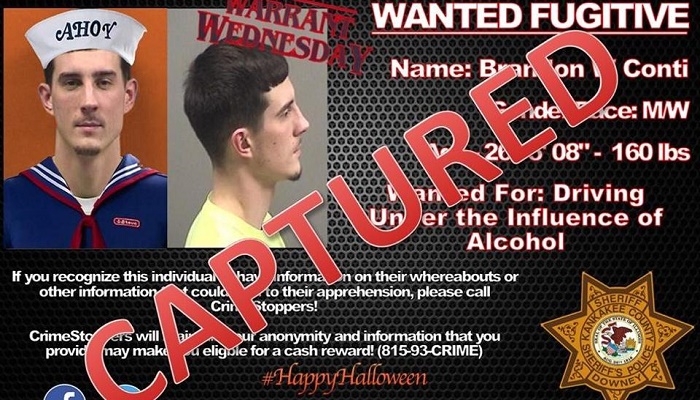 When Kankakee County Sheriff’s department took to Facebook to share a wanted poster of a fugitive, they had no idea that it would turn into something so unusual, reports Hindustan Times.

On October 30, the department shared a post along with an image of the perpetrator. They asked people to provide information about the man in picture and guaranteed that their identity will not be revealed.

Many dished out their reactions, but it was 25-year-old Brandon W. Conti’s comment that piqued everyone’s interest.

Turns out, Conti is the man in question who is wanted by the police for failure to appear on a drunken-driving charge, reports Daily Mail.

Conti commented on the post, which was later deleted, and asked, “Where’s my costume?” reports Daily Mail.

To which the department shared an edited image of Conti in a sailor’s outfit – with the word “Ahoy” written on the cap. Many quickly recognised that the costume is a reference to the character Steve Harrington from the popular Netflix series Stranger Things.

People had a lot to say about this interesting turn of events.