Conspiracy on to create unrest 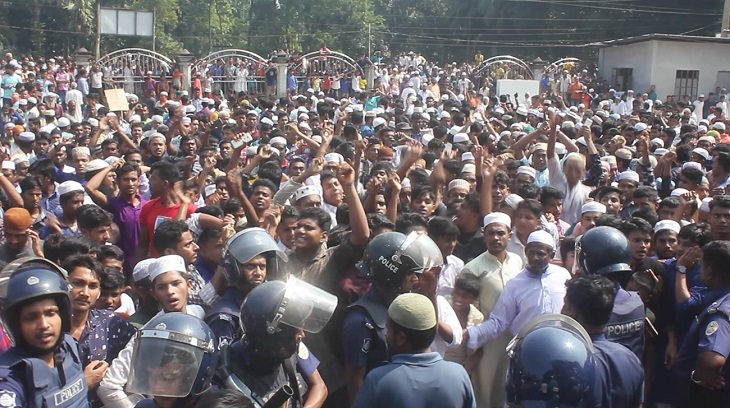 Anti-government elements have become desperate to provoke a wave of unrest in the country by uploading contents hurting the religious sentiments of Muslims on facebook.

As part of their conspiracy, the evil forces recently hacked a facebook account of a Hindu man in Bhola and posted derogatory remarks about Prophet Mohammad (pubh) on the social media.

The disparaging comments sparked a series of clashes between a mob and law enforcers in the coastal district on October 20, leaving four people dead and over 100 injured.

Using the same tactic, a vested quarter unleashed violent attacks on homes and business establishments of the minority Hindu community people in Nasirnagar of Brahmanbaria in 2016.

A communal violence also took place in Ramu of Cox’s Bazar in 2012 over a facebook status.

In the latest move to destablise the country, the conspirators hacked the facebook account of the Hindu fisherman in Bhola and posted comments that triggered a violent clashes.

Law enforcement agencies have taken adequate measures, including filing of cases and arrest of suspects for the Bhola anarchy.

Despite the government’s instant action, the anti-government elements together with various fundamental organisations staged demonstrations in the capital and elsewhere in the country, demanding punishment for the Hindu man of Bhola.

Earlier, the National Human Rights Commission (NHRC) conducted an inquiry into the Nasirnagar incident and found conspiracy of a vested quarter.

Many local people being misled by conspirators took part in attacks on properties of people of minority communities.

Later, police and others government agencies investigated the incident and got the similar findings.

Conspirators are trying to create various issues to destabilise the country and put the government in an awkward situation.

The killing of BUET student Abrar Fahad by some ‘so-called’ BCL leaders and Shibir ‘agents’ also aimed to trigger a campus violence and destabilise the country.

The Bhola unrest arose shortly after the government successfully controlled the BUET incident by bringing all the accused to justice.

Prime Minister Sheikh Hasina also arranged a meeting with Abrar’s parents and consoled them at Gonobhaban.

As the Awami League-led government is making unprecedented socioeconomic development in the country, it is hard for the conspirators to put the party out of power through election, many said.

So, anti-government elements along with fundamental organizations are creating various incidents to destabilise the country.

Security expert Major General (rtd) AK Mohammad Ali Sikder told the daily sun: “The Bhola incident is a well-planned conspiracy. They (conspirators) tried to create a tensed situation all over the country by using religious sentiment. Their aim is to put the government in an awkward situation.”

He also said: “Before the clash police made them understand and they were getting back but suddenly a group of people attacked on police and the clash begin. So, we can say it is a planned incident.”

“The religious political parties in a preplanned way created the unrest in the country and tried to prove that the government failed to secure life and property of the people.”

Security Expert Major General (retd) Md Abdur Rashid told the daily sun: “I think this is a planned project to destabilise the country.”

“There are conspirators behind the Bhola incident. They did it by using religious sentiment in a planned way. So, we can’t say it is an isolated incident.”