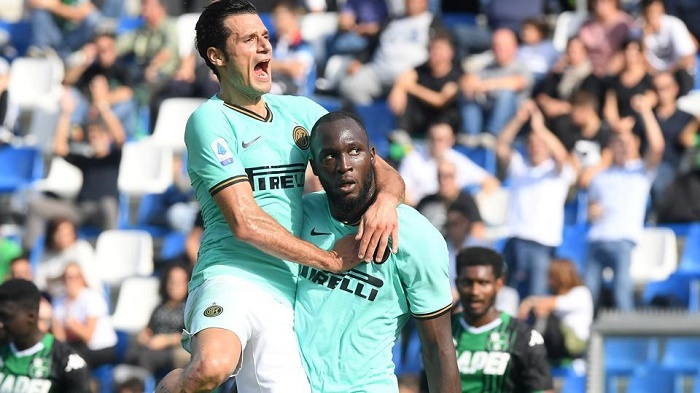 Italian coach Antonio Conte has made his “gentle giant” Romelu Lukaku the focus of Inter Milan’s attack this season where the striker has found his scoring touch again after leaving Manchester United.

The Belgian got off the mark in his first league match against Lecce and has since scored five goals in eight Serie A games since departing Old Trafford under a cloud last summer.

The 26-year-old scored a brace last weekend against Sassuolo to keep Inter second in Serie A, one point behind defending champions Juventus, after eight games.

It followed his double as Belgium sealed their Euro 2020 ticket, extending his national all-time record to 51 goals in 83 appearances.

Conte’s side host Group F leaders Borussia Dortmund in their third Champions League game on Wednesday having been held 1-1 to Slavia Prague and losing 2-1 to Barcelona, with Lukaku missing the trip to Spain with a thigh injury.

Inter gambled big by investing around 80 million euros ($89 million) in Lukaku to restore the pairing he composed under the Red Devils’ jersey with Alexis Sanchez.

Chilean Sanchez made just four appearances for Inter before being ruled out for three months with an ankle injury.

But Lukaku has still impressed with a rich vein of form alongside Argentine Lautaro Martinez, who also scored a double at the weekend against Sassuolo.

“We’re working with Romelu to get to know one another better,” said Martinez. “We’re looking to improve our understanding to help Inter to win.”

The Belgian’s high energy levels and sharp play are in contrast to United where he spent two seasons, scoring 42 goals in 96 appearances, but just 15 last season.

He was never far from fan criticism, over his weight and professionalism, as he fell down the pecking order once Ole Gunnar Solskjaer replaced Jose Mourinho.

Hopes had been high that Lukaku could spearhead a new era for United when he joined from Everton for o75 million ($91 million) in 2017, but he left Manchester having failed to win a trophy.

“At the end, I thought it was better for me to move on and try different things,” said Lukaku, who took the number nine jersey of former Inter captain Mauro Icardi, who fell out of favour and moved to Paris Saint-Germain.

Conte had been a long-time admirer of Lukaku, who started his career at Anderlect, and tried to sign him for Chelsea before the Belgian’s move from Everton to United.

“Lukaku entered the Inter world in the best of ways, with great humility, he’s a good giant, a giant with a smile,” said Conte, who is trying to break Juventus’s stranglehold in Italy and win Inter’s first title since their treble under Mourinho in 2010.

Despite being targetted by racist chants during a league game in Cagliari, Lukaku has no regrets about choosing Italy, and above all Conte.

“Between him and I there is a very strong relationship. I’m happy. At the age of 26, I want a coach like this, who helps me every day and gives me motivation,” said Lukaku.

“He’s the best manager in the world.”

His move to Italy was also eased by the presence of his brother Jordan Lukaku, 25, who has played as a defender for Lazio since 2016.

Former Inter Milan star Samuel Eto’o has praised Lukaku for how he has adapted.

“We played together at Everton, he was already big and strong even though he is like a baby, but he is very intelligent and on the issue of racism, he said important things,” said the Cameroonian.

“Some players think they are stars and others feel like normal people, he’s in the second category, and you’ll see how many goals he’s going to score.”

Ex-United teammate Zlatan Ibrahimovic, who won three Serie A titles with Inter Milan, added: “Lukaku has this mad hunger to prove himself to the world and I’m sure he will do well at Inter too.”

United may be missing Lukaku’s goals as they languish in 13th place in the Premier League having scored 10 in nine games.