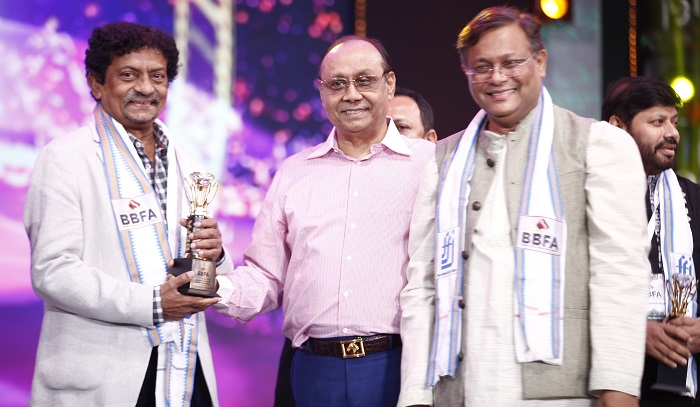 The first ever Bharat-Bangladesh Film Awards (BBFA) was held in the city’s International Convention City Bashundhara (ICCB) on Monday, rejuvenating the cultural bond of two countries.

Bashundhara Group and Film Federation of India jointly organised the function which was presented by a Bangladeshi film production company TM Films.

Information Minister of Bangladesh Dr Hasan Mahmud and minister of West Bengal Bratya Basu and President of the Film Federation of India (FFI) Firdausul Hasan were present at the inauguration of the film award ceremony.

Information Minister Dr Hasan Mahmud said that this kind of cultural exchange will help both countries in developing of the film industry and create a synergy between them.

“We have many things in common that keep close to each other in every aspect. I hope our film industry will shine globally with our joint efforts” he said.

Bratya Basu, who is also professor, dramatist, director and actor, said with organising such big cultural programme, the indication of a beautiful and meaningful relationship of two Bengals.

“Once we had very meaningful cultural exchanges between us. We organised a film festival for the first time in 1965 where Satyajit Ray was present. I wish it is just beginning of a new era for our film industries and will progress fast in coming days”, said Bratya Basu.

West Bengal popular actor Ranjit Mollik and Bangladesh actress Anwara Begum have been given lifetime achievement awards in the first ever film award.

This is the first time such a programme where 24 awards were given in three categories to those Bengali films released in Bangladesh and India between June 2018 and June 2019.