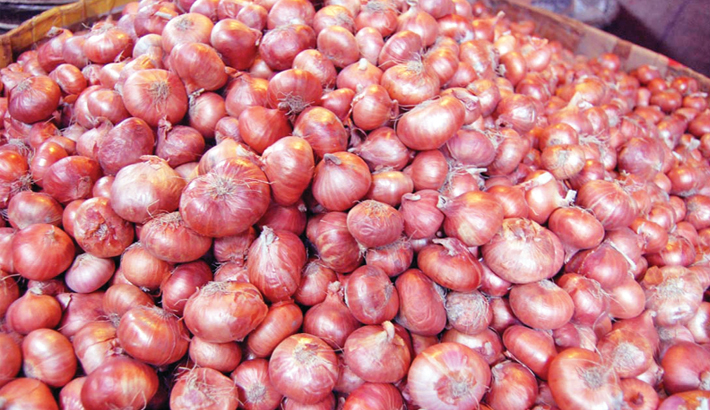 Onion price again skyrocketed to Tk 110 per kilogram, posting a further hike by Tk 30 per kilogram in a week, triggering an outrage among consumers as business people are cashing huge profit.

Onion prices have been on an upward trend since mid-September, but the latest spell has put the common people, especially the low, middle and fixed income groups at dire state.

Onion prices jumped in Indian wholesale markets since mid-September, resulting in a hike in its cost of import to Bangladesh.

Cashing on the issue syndicates of big traders and importers are bagging windfall profits though the domestic production was near to the demand.

Some hoarders were controlling the onion market and stocked the important food ingredient was in their hands, said Abdul Hakim a retailer at Mohammadpur Krishi Market.

A section of unscrupulous traders are allegedly trying to create an artificial crisis by squeezing the supply of the kitchen essential with a view to get unethical financial benefit.

Though the government took different initiatives like market monitoring, import onion from other sources and Trading Corporation of Bangladesh’s (TCB) continued to sale onions at a subsidized price in open markets in the capital, did not yield any result.

Whether the onion price would go back to the previous level, the traders said there was no chance of that as farmers have no onion stock currently and had been hoarded by traders.

The price of the item increases each year, but harvesting looses due to heavy rains throughout the country causing rise in onion prices this year.

Farm economist Professor Golam Hafiz Kennedy told the daily sun that the government should fix the local demand and it tries to fulfill the demand through local production after giving incentive on onion cultivation.

He said traders increased onion price each year in the lean period when farmers don’t have any stock of onion.

Government should monitor market properly and follow the rate of import price, he said.

Our annual onion demand is 24 lkah metric tonnes in the country.