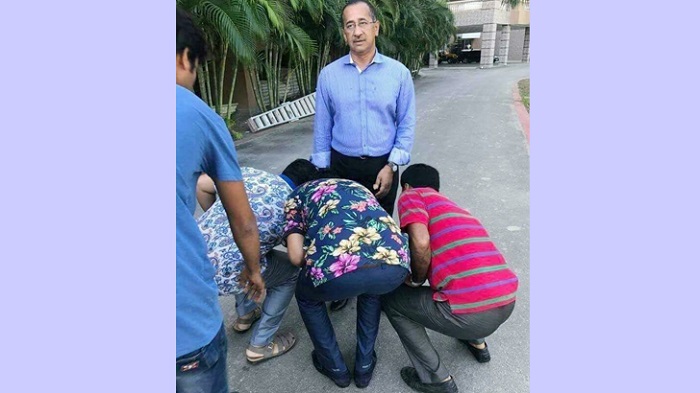 In the photo, three persons sought the blessings in the traditional manner by touching his feet and one other bowed to touch his feet.

However, the Daily Sun became unable to independently confirm the date, when the photo was captured.

Awami League President and Prime Minister Sheikh Hasina has convened a meeting to decide age limit of Jubo League, to be held at Ganobhaban on Sunday.

According to media report, the Jubo League chairman was not invited to attend the meeting at Ganobhaban.

The AL president forbade Omar Faroque Chowdhury and Nurunnabi Chowdhury Shawon, a presidium member of the youth wing of the party, to attend the meeting with due to their controversial activities and alleged involvement in illegal casino business.

The government also imposed a travel ban on Omar Faroque Chowdhury and the Financial Intelligence Unit (FIU) of the Bangladesh Bank asked the authorities of different lenders to send bank statements of him.