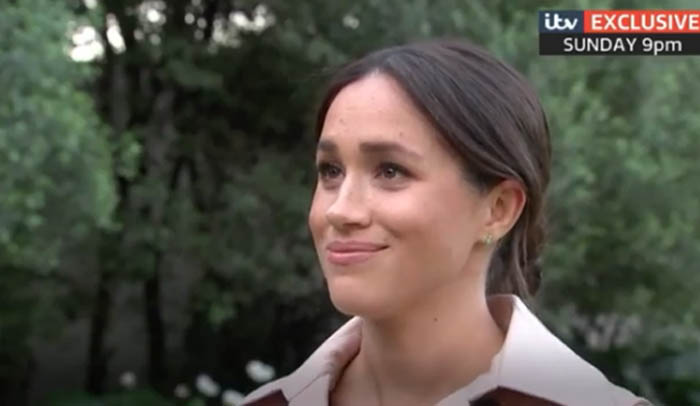 Meghan Markle has opened up about how royal life has been a "struggle", especially with being a new mum.

The Duchess of Sussex, 38, gave an emotional interview as part of the upcoming ITV documentary, Harry and Meghan: An African Journey, airing on Sunday at 9:00 pm.

He can be seen talking to former actress Meghan about the toll royal life has taken on her.

She fights back tears, saying: "Look, any woman especially when they are pregnant you’re really vulnerable and so that was made really challenging, and then when you have a newborn – you know…

"And, also thank you for asking, because not many people have asked if I’m OK. But it’s a very real thing to be going through behind the scenes."

Tom asks her directly if it is fair to say that it has been a struggle, and looking emotional, Meghan replies: "Yes."

The hour-long documentary features interviews with the royal couple as well as an insight into their work, and how they’re balancing public and private life.

Meanwhile, a clip from the documentary released on Thursday showed Prince Harry revealing he feels the 'festering wounds' left by his mother's death.

Prince Harry, 35, opened up about how important Africa was to him as he came to terms with the death of his mother, Princess Diana.

The dad-of-one was able to follow in her footsteps during the tour, as he worked with the charity HALO clearing landmines.

He said: “It’s been quite emotional retracing my mother’s steps, 22 years on. Let’s finish what was started.”

Following Prince Harry as he continued his mother’s work, Tom asked him if her death was still painful.

He asked: “Do you feel at peace in a way yet? Or is it still a sort of wound that festers?”

“Being here now 22 years later trying to finish what she started will be incredibly emotional but everything that I do reminds me of her.

“But as I said with the role, with the job, and the sort of pressures that come with that I get reminded of the bad stuff, unfortunately.”

The ITV documentary, Harry and Meghan: An African Journey, will air on Sunday at 9 pm and presenter Tom Brady said it will reveal the “happiness” alongside the “pressure and pain” of being a royal.

Bradby said: “The story of their time in Africa was of passion for their work, pride and happiness, but also a world a pressure and pain behind the brave faces.”

A trailer for the documentary was previously released, showing The Duke and Duchess of Sussex cradling baby Archie.

Meanwhile, court documents today claimed a "private and confidential" letter from the Duchess of Sussex to her estranged dad Thomas Markle, 75, was written at a "time of great personal anguish and distress".

Meghan is bringing legal action against Associated Newspapers, the publisher of the Mail on Sunday and MailOnline, over an article which reproduced parts of the letter to Markle, 75.

In papers seen by the PA news agency, which outline details of the duchess's claims, her solicitors say the letter was "obviously private correspondence" which detailed "her intimate thoughts and feelings about her father's health and her relationship with him at that time".

The duchess is seeking damages for alleged misuse of private information, copyright infringement and breach of the Data Protection Act.

Associated Newspapers wholly denies the allegations - particularly a claim that the letter was edited in any way that changed its meaning - and says it will hotly contest the case.

Markle has claimed he felt pressured to share the letter after it was misrepresented in a magazine article.

In an interview with the Mail on Sunday, he said: "I have to defend myself. I only released parts of the letter because other parts were so painful. The letter didn't seem loving to me. I found it hurtful."