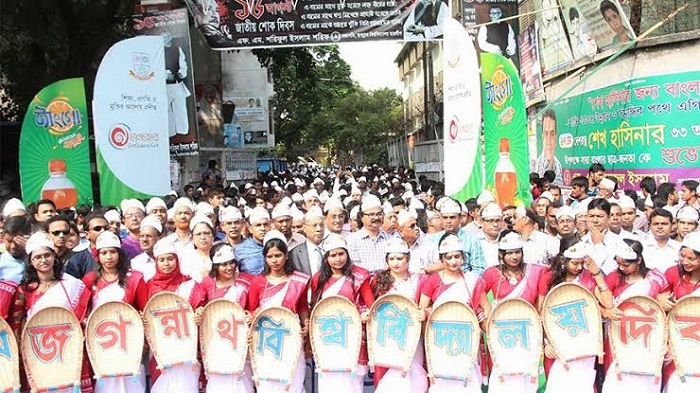 Teachers, students and employees of Jagannath University (JnU) will observe its 14th founding anniversary in a festive mood on the campus October 20, said a press release of the university on Friday.

The university authorities has already begun to chalk out an array of programmes marking it’s anniversary, according to the release.

National flag will be hoisted at 9:10 am along with flag of the university and national anthem will be sung on Sunday morning.

JnU Vice-Chancellor Prof Dr Mijanur Rahman will inaugurate the promgramme releasing pigeons as well as balloons in front of the Shaheed Minar on the campus.

A procession will march on the different roads of the campus, Rayshaheb Bazaar and Bangla Bazaar starting from Shahid Minar premises of the university around 9:30 am.

Later, an art exhibition, named 'The Annual Fine Arts Exhibition', will be arranged at the ground floor of New Academic Building.

A discussion will be held at 11:00am and a drama named “Lal Jamin” will be staged at University’s Central Auditorium at 11.30am following the discussion. A cultural programme is also scheduled to be held on the Social Science Building premises.