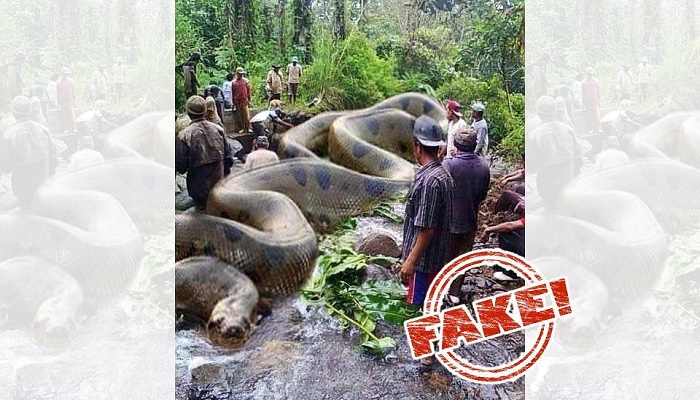 Image of a snake – shared on various social media platforms during different times – claiming that it’s “World’s biggest snake Anaconda found in Africa’s Amazon river” is doing its rounds on the Internet.

The image is fake and the claim is untrue, reports The Hindustan Times.

The image is not recent and has been circulating for at least since 2015.

There are many aspects that indicate that the image is edited.

Talking about the caption, it claims that the snake is found in Africa’s Amazon River. This is false as Amazon River is located in South America not Africa.

The posts also claim that the reptile is “134 feet long and 2067 kgs.” According to National Geographic, the green anaconda is the world’s largest snake and it can weigh up to 550 kgs – which is far less than what the posts claim. Also, this kind grows up to about 30 feet. Though the reticulated python can grow slightly longer in length, the green anaconda is the heaviest. Hence, the claim that the reptile is 134-foot-long is false too.

Coming to the claim about the number of animals and human beings killed by the snake, there is no such report on the Internet that indicates about such a massive tragedy.

According to the posts, Africa’s Royal British commandos killed the snake. Such an organisation doesn’t exist.