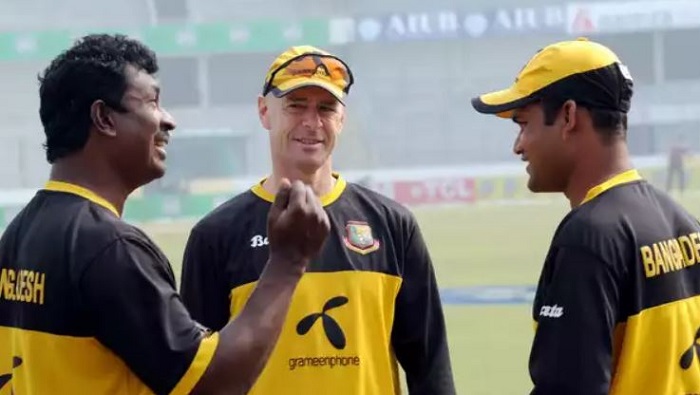 Bangladesh Cricket Board seemingly has a kind of stigma when it comes to evaluating local coaches or even developing them to serve at the highest level.

In every sphere of BCB's game development, it is a common notion that foreign coaches will be in a leading position while the locals will act as their helping hand.

The same is the case with the national team's dressing room, which is filled with overseas coaching staff due to the fact the BCB higher-ups believe they are the best bet.

There were exceptions with Khaled Mahmud taking on the role on an interim basis but that seemed to be more of a stop-gap arrangement more than anything else.

And with how those stints turned out, it seems like there is hardly any place for local coaches in the national set-up. Yet, local coaches had the opportunity to prove their mettle as they had the chance to stack up against foreign coaches in the Bangladesh Premier League - the lone franchise-based Twenty20 competition of the country.

However, given that the BCB decided to abandon the tournament for the time being due to the unreasonable demand of the franchises and instead opted to host Bangabandhu BPL, the future of local coaches was left facing a dilemma.

The announcement made by the BPL governing council recently suggested that local coaches could only work as assistants to foreign head coaches in the upcoming edition of BPL, which aggravated matters further. That, despite the fact that local coaches have shown a considerable amount of success in BPL, winning three titles in six editions of the tournament.

Mohammad Salahuddin, known to be the best in the business and considered as the mentor of several leading national stars including the likes of Shakib al Hasan and Mominul Haque, has guided Comilla Victorians to the championship on two occasions, while Khaled Mahmud led Dhaka Dynamites to the title glory once. In the other three editions, Ian Pont led Dhaka Gladiators twice, while Tom Moody had success with Rangpur Riders once.

Salahuddin, surprised with the entire turn of events, showed his disappointment through a post on his Facebook page where he lambasted the BCB.

''Today I realized that the standard of local coaches are not good. Trainers are not up to the mark while the physios were joking for so long. Everywhere foreigners will come is good then why don't you bring any foreign directors for BCB, it is alright that the coach trainer and physios are not of international standard then how come you [ directors] think that you are of international standard. You are all like us. You should bring foreign directors,'' he wrote in his Facebook post.

One of the leading local coaches, Nazmul Abedin, left BCB this October after serving the board for 14 long years in a different capacity. One of the major reasons behind his decision was that his position was being handed to overseas personnel with each passing day in various capacities.

Nazmul believes that this decision of the BCB of only foreign coaches manning teams in the BPL will have a negative impact on the mindset of the local coaches and even more on the ones who want to take up coaching as a profession.

''This coming November we will be celebrating 20 years in Test cricket and I am really scared that we have not been able to produce a good coach and that just shows how bad the situation we are in at the moment. I do not know the logic behind this decision because local coaches have done well in the last couple of editions,'' said Nazmul on Friday (October 11).

''This kind of decision will certainly discourage the local coaches who really want to see themselves in a higher position and I do not think anybody will be very eager to coach and they might look for other alternatives,'' he said.

''I really do think BCB believes that we don't have qualified coaches despite there are two to four persons who have the coaching ability. For some reason they do not want to employ those coaches and this is a questionable decision for such a big organization,'' he said.

Former national head coach Sarowar Imran, who also had the privilege to lead different sides in the BPL, looked to be totally bemused with this unexpected decision of BCB.

''I am disappointed. There is no country in the world that says there is no place for local coaches for head coach position,'' said Sarowar.

Bangladesh coaches have had a lot of success in the BPL. Last year, the two finalists Dhaka Dynamites and Comilla Victorians were coached by locals.

''I have played a final with a bad team in 2012. Barisal Burners lost to Dhaka in the final. In 2016, Rajshahi Kings played final with a normal side and we lost to Dhaka,'' he said. ''Salahuddin won two times while Khaled Mahmud won once and these results prove the credentials of local coaches,'' he said.

"It is not like all the seven coaches will be foreign. I was not present in the last meeting [of BPL governing council] but my question is those who have done well why they won't have a chance. Even they can have a chance and it is totally dependent on the next meeting because nothing has been finalized yet. We will make a decision at that point and those [coaches] who have done well naturally their name will be considered,'' Akram told reporters at Sher-e-Bangla National Stadium on Saturday (October 12) when asked about the chances of having local coaches in the BPL.

Whether or not the BPL governing council changes its mind regarding the head coaches in the tournament, will be known in the coming days. But they have certainly given a clear message that there is hardly any place for local coaches in the longer scheme of things, which is surprising considering that other cricketing nations are inclined to develop their local coaches.