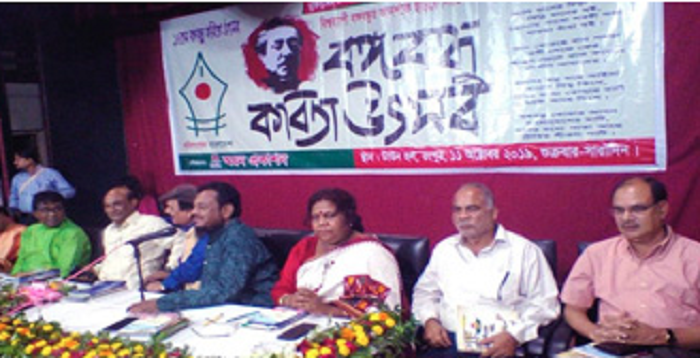 Poets and literary personalities at a discussion have stressed on spreading ideals of Bangabandhu among young generations across the world to build a non-communal and peaceful global village.

They expressed the view in the discussion arranged at the 16th ‘Bangabandhu Poem Festival-2019’ held at Town hall auditorium in the city on Friday afternoon.

The central committee of ‘Kobi Sangsad Bangladesh (KSB)’ organised the day-long poem festival on the eve of the centenary birth anniversary of Father of the Nation Bangabandhu Sheikh Mujibur Rahman.

With Vice-president of the central committee of KBS poet Ferdousi Rahman Beauty in the chair, its Life-term Member poet Imroz Sohel attended the inaugural function as the chief guest.

Joint Secretary to the Ministry of Cultural Affairs Md. Shawkat Ali attended the concluding function as the chief guest.

Fifty poets from across the country recited their self-composed poems dedicated to Bangabandhu in the day-long poem festival that ended at night with a colourful cultural function.
Tens of hundreds of people of all ages, including poets, literary and socio-cultural personalities and common citizens, from all over Rangpur division thronged there turning the venue into a place of grand festivity.