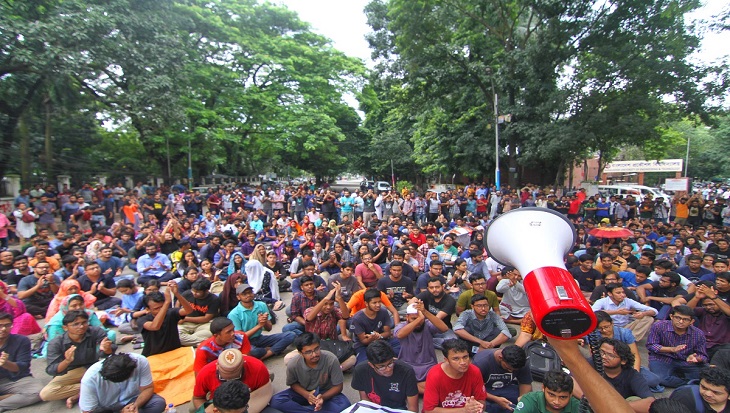 BNP on Wednesday expressed its solidarity with the demands of demonstrating students of Buet over the death of Abrar Fahad.

He demanded the government immediately arrest Amith Saha, a student of Sher-e-Bangla Hall’s 2011-No room where Abrar was reportedly tortured to death.

“We express our solidarity with each and every demand of the students who have been on a movement,” Rizvi said.

He said though Abrar was tortured and killed in Amith Saha’s room, no action was taken against him. “He was neither made accused in the case, nor expelled by Chhatra League. The Buet administration and controversial police officials are active to save him.”

The BNP leader said Abrar was beaten to death for reportedly posting a status on Facebook in the interests of the country’s soil and water. “The government deceived people by signing the anti-state deal. So, the government can’t avoid the responsibility for the murder of Abrar.”

Stating that the Prime Minister is going to address a press conference today (Wednesday), he said people want to know whether she will annul all the “anti-state” deals.

“I would like to tell the Prime Minister that Abrar was killed for protesting the anti-nation deals. So, you prove you’re in favour of Abrar by revoking the deals with India. Abrar’s soul won’t rest in peace without cancellation of the anti-national agreements,” Rizvi said.

The BNP leader alleged that the government is resorting to various tricks to divert people’s attention to a different direction from the main cause of Abrar’s brutal murder.

He alleged that the entire country now has become a torture cell while people of all ages are being subjected to repression of the cell.

He alleged that the government is killing people through indulging in enforced disappearance, abduction and extrajudicial murder while Chhatra League while Jubo League are repressing their opponents and killing them in “their torture cells”.

The BNP leader called upon people to get united against the government to end misrule and restore the rule of law.