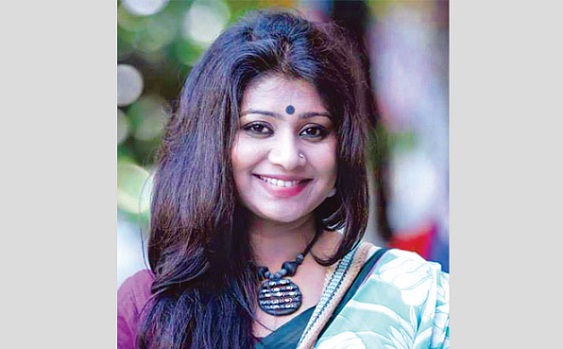 Our honorable Prime Minister Sheikh Hasina received the prestigious Tagore Peace Award for her outstanding contribution to establishing peace, alleviating poverty and preventing corruption. Isha Muhammad, president of Kolkata Asiatic Society handed over the award to the PM at an event in New Delhi on 5 October. After receiving the award, she dedicated it to her country's people who elected her. We are truly  proud of our "mother of humanity" who has uplifted our honour in front of the whole world. 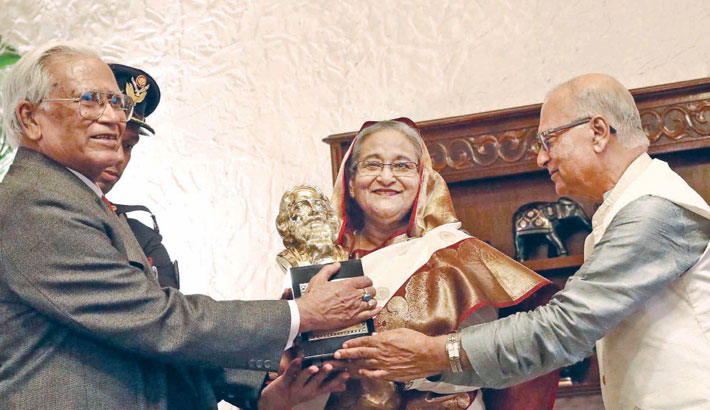 The Tagore peace award signifies for building cultural friendship in connection with the 150th birth anniversary of Nobel Laureate Poet Rabindranath Tagore. The government of India introduced this award in 2012. Eligible individual, organization and institutions are considered for this award for spreading the values of cultural friendship. In order to go with the selection, generally the contributions of last ten years are considered. Since PM Hasina received the award this year, she must have done something remarkable in the last ten years. Let's then focus on a few of her contributions.

Sheikh Hasina won the election on 29 December 2008. She took her oath as the PM and joined Prime Minister's office on 3 January 2009. From then on, she has been working on fulfilling her father's dream of building a prosperous and exploitation-free nation. Her party members often claim that Hasina has brought this country from darkness to prosperity. However, as an ordinary citizen, I think, our PM has contributed to the betterment of the entire entity of Bangladesh the best way possible. I may run out of words and inks if I start jotting down every damn points. So, I will only mention the unavoidable facts.

When Hasina took power, the country was only trying to survive on its own after going through a dark phase. She had to face a lot of challenges. But she transformed her challenges into possibility. Her father, father of the nation Bangabandhu Sheikh Mujibur Rahman dreamt of a Sonar Bangla. She herself too dreamt of and designed Digital Bangladesh--a country where its youth will be empowered and digitalized. She started taking sustainable initiative. She is doing everything to reach the goal. In the recent summit at New Delhi, she asserted, "We are close to achieving double-digit growth. Since 2009, Bangladesh’s economy has grown by 188 per cent in size. Our per capita income has crossed $1,909."

In many government and private sectors, we see lesser rate of unemployment. It has reduced down remarkably in the last ten years. I want to enjoy the privilege of personalizing my aforementioned statement. Even eight or ten years ago, people used to get maid servants from rural areas. But gradually women and men found the source of their employment. Female workers are heading towards garments and other working sectors. They now prefer to live their life with an identity. Thanks to the honorable PM for opening and reopening so many job sectors.

There must be a good reason behind this empowerment of women. It is because women are getting more academic education than before. This year on Women's Day, PM Sheikh Hasina was awarded "Lifetime Contribution for Women Empowerment Award" for her significant contributions to the field of women empowerment and her dynamic leadership in South Asian region. The rate of female literacy has risen up significantly. The more education women get, the more concerned they become about their rights and responsibilities. As a result, the whole country is progressing altogether.

Women can raise their voice against all sorts of discriminatory disputes. Under Hasina's reign, women can roar against sexual and physical violence. For example, I myself took proper step against an abusive and insolent man who sexually harassed my maid servant. No one protested against me for being a woman, because whatever I did was necessary to punish that beast. I could do it because I knew my leader is a lady who understands and secures safety and security for her female population. Thanks, PM; you ignite courage in so many women out there. I am just one of them.

Now, since this award is given on the basis of making cultural harmony, let me put some light on the sociocultural issues which have been settled down by our honorable PM. People of Bangladesh have become more tolerant towards other religions, races and cultures. They can accept the dissimilarities with an open mind. In a speech, Hasina said, “HSBC predicted that Bangladesh would be the 26th-largest economy in the world, by 2030. Two things are key: One is our open society, religious harmony, liberal values and secular culture. The other is that two-third of our homogenous population is young — mostly under 25”. To prove her statement true, let me just give an example. According to an official estimation, in Chattagram there are 1999 puja mandavs where Hindus are celebrating their biggest religious fest. Muslims and people of other religions are cordially sharing their joy together.

During Sheikh Hasina’s reign, we have witnessed so many developments in architectural sectors as well. One of the most importantly mentionable is upgradation of highways to four lanes, including the Dhaka-Ctg highway. It has reduced traffic jam on the road. As a result, we can enjoy the journey effectively. For example, if I talk about my own personal interest, I can now go to Bogra—my mother’s place—from Chittagong in a shorter time. I wish honorable PM would also establish an airport in Bogra. That’s my request to her! And I believe one day she will fulfill this dream of so many people.

Our honorable PM Sheikh Hasina has increased the salaries of the employees in every sector. Not only in government sectors but also in private sectors the salary has been increased to a satisfactory level. For this reason, employees remain happy and are less likely to commit any corruption. Money is one of the biggest motivations. We should always look for earning money in an honest way. Sheikh Hasina, by improving the figure of the amount, has motivated the job holders.

In the aforementioned ways, our honorable PM Sheikh Hasina has alleviated poverty, fighting against corruption, increased opportunities and established harmony in Bangladesh. Her achievement is our pride. She has a vision of making Bangladesh a developing country by 2021 and a developed country by 2041. We, the people of Bangladesh, should keep our faith in her abilities and support her to the fullest. If government and people work hand in hand, only then we will be able to reach our goal and make our Sonar Bangla.