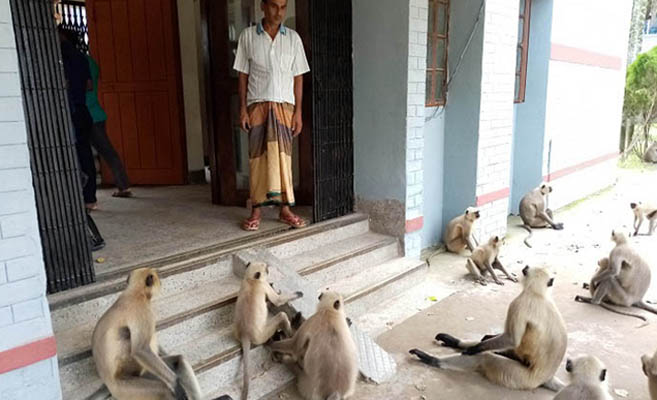 A group of Hanuman (Rare species black-faced monkey) on Sunday staged a demonstration in front of the Keshabpur police station protesting abuse of a monkey-kid.

A group of monkey numbering 20-25 took in the main entrance of the police station on Sunday noon. At one stage they entered duty officer’s room.

Md. Shaheen, Officer-in-Charge (OC) of the police station told media that a mother monkey taking her baby in her lap came to the police station as someone beat its kid. Soon after that a group of Hanumans came and take sit in front of the main entrance and inside duty officer’s room.

‘I assured the mother Hanuman to take steps against those attackers and gave them some dry foods. Later, they went away after staying around an hour there,” OC Shaheen said.

Keshabpur Upazila Forest Officer Abdul Monayem Hossain said, there are more than five hundred Hanumans (Black-faced monkey) around the city and adjacent area. They are allocated only 35kg bananas, 2kg nuts and 2kg buns. The allocation is too little to their needs. Hanumans used to enter residences and offices in search of food.

Hanuman a very sensitive animal, came to the police station by group whenever they had been attacked. Several times such an incident took place earlier, Monayem Hossain added.