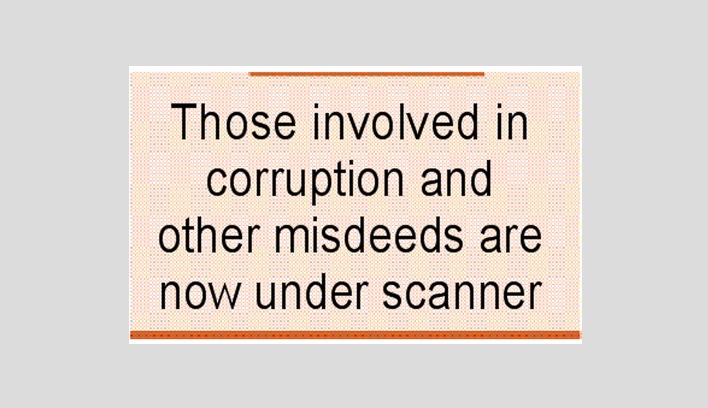 Ruling Awami League leaders involved in criminal activities have been gripped by fear and frustration as Prime Minister Sheikh Hasina’s government in a surprise move took a hard line against those involved in corruption, crimes and other wrongdoings.

Insiders told the daily sun that the party has already started a drive against those as per its election manifesto that pledged “zero tolerance” against illegal activities including corruption irrespective of their party affiliations.

The Prime Minister has hinted that after the current drives against the wrongdoers severe actions would be taken against AL members who have amassed wealth illegally.

“Members of the Juba League (BJL) have been under the observation of the law enforcers after Chhatra League. We will take severe action against all in the party one by one,” she said.

“I am working hard to take the country forward. I will not allow anyone to put stigma on me, my party or government. I will not spare anyone,” she said.

As part of her government’s effort, Sheikh Hasina-led government brought opposition Bangladesh Nationalist Party (BNP) chief and former premier Khaleda Zia to book on corruption charges. She was jailed after being convicted in two corruption cases.

Amid the crackdown, BNP alleged that top to bottom of the government was involved in corruption.

“All, including Juba League, Chhatra League are plagued with corruption. During the drive in the past few days people have witnessed the situation,” BNP secretary general Mirza Fakhrul Islam Alamgir said.

About the drive, home minister Asaduzzaman Khan on Saturday said that none would be spared for any illegal activities including corruption.

“In line with the directive of Prime Minister, whoever may be —-either public representatives or members of the administration—— none will be spared. We are taking measures against the corrupt people based on proof,” he said.

“Those, who have involved themselves in corruption, breached laws and exercised power, are now under watch,” he added.

Before the December 30 polls, people from all walks of lives expressed their concern about corruption, drug abuse and money laundering.

They hoped that the next government would address such menaces after assuming office.

Allegations were rife that several thousand crore taka had been laundered during the two terms of the ruling Awami League.

After assuming office in a landslide victory in December 30 elections, Sheikh Hasina said that her government would not spare anyone involved in corruption.

Awami League insiders say that during the last election people with questionable activities were not given tickets to contest the polls.

“Even, she has dropped cabinet members who had links unacceptable activities,” said a central leader wishing not to be named.