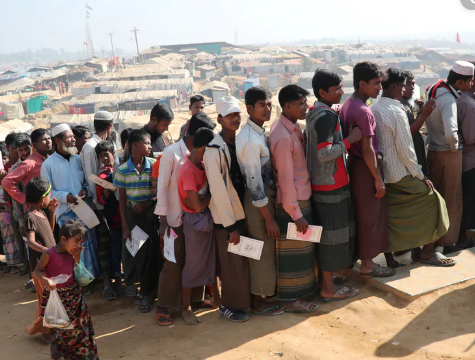 State Minister for Women and Children Affairs Fazilatunnesa Indira sought support of the Commonwealth countries for the repatriation of the Rohingyas who have taken shelter in Bangladesh, fleeing violence in their homeland Myanmar.

She sought the support while addressing a session at the four-day 12th Commonwealth Women’s Affairs Ministers Meeting in Nairobi, Kenya, said a press release.

The state minister said Commonwealth countries can play a vital role in bringing back the forcibly displaced Rohingya people to their homeland Myanmar and improving their living standard.

She said achieving the SDG targets will not be possible in the Commonwealth countries in the true sense of the term keeping more than one million (around 11 lakh) people (Rohingyas) in crisis.

Representatives from 53 Commonwealth countries are taking part in the conference from September 17 to September 20. A five-member Bangladesh delegation led by the state minister joined the conference.

Fazilatunnesa Indira said the Bangladesh government has given the highest priority on economic, social and political empowerment of women in the 7th Five-Year Plan, National Women Development Policy 2011 and achieving Sustainable Development Goals (SDGs) by 2030 and turning the country into a developed one by 2041.

The state minister said the present government is pledge-bound to bring down the child marriage rate to zero percent by 2041.

She said the country is formulating gender responsive budget from 2009 and at present 43 ministries are making this budget which is 31 percent of the total national budget.

Fazilatunnesa Indira said the government is setting up around 7,000 “Kishor-Kishori (adolescent)” clubs across the country. Bangladesh is now one of the promising countries in expanding women education and creating women entrepreneurs, she added.

Women and Children Affairs Secretary Kamrun Nahar addressed the session of senior officials in the conference.