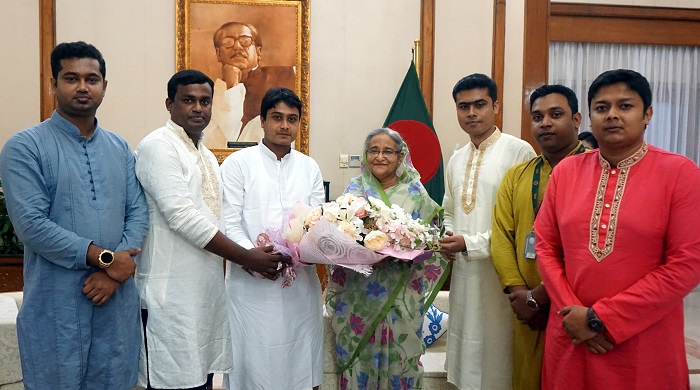 Prime Minister Sheikh Hasina on Thursday vowed to eliminate all bad elements and inconsistencies of the society.

Issuing a stern warning to wrongdoers, the Awami League president also asked the leaders and activists of Bangladesh Chhatra League (BCL) to pursue politics with principles, ideology and patience.

None will be spared for any wrongdoing, the Awami League chief warned her party men.

She said expressed her pledge while talking to a 23-member delegation of Bangladesh Chhatra League (BCL) called on her at her Ganabhaban residence this evening.

“I do not want to hear any complaints, we have to shine our image, have to run our organisations following the ideals and policy of the party,” Sheikh Hasina told BCL leaders.

Sheikh Hasina told the BCL leaders: “We’ve given you responsibility by keeping confidence and trust in you. If you fail to keep up that dignity, there is no need of you.”

The prime minister also advised the BCL leaders and activists to be humble, saying: “We don’t expect that the student leaders will show off their power after going to power … you’ll have to be humble as long as you’ll go to the top.”

Sheikh Hasina said the government became hard on Jubo League after Chhatra League. “Social anomalies will have to be removed and we’ll not tolerate clashes and killing with the casino,” she said.

The prime minister said she is developing the country through hard work. “But I’ll not allow any black spot to be put on it … I’ll not spare any wrongdoer,” she said.

Sheikh Hasina said how the foreigners came with casino and how they got visas — all things will be probed. “If anybody tries to obstruct this work, he or she will be dealt with iron hands,” she said.

The prime minister suggested the BCL leaders and activists to earn confidence and trust of the people. “You should not do such a work for which the people become annoyed,” she said.

Sheikh Hasina said Chhatra League will stand on a solid foundation if its leaders and workers do politics with true principles and ideologies. “The confidence and trust of the people in the organisation will be increased further for it,” she said.

“If you don’t move with an ideology, then on whom we will leave keeping the country in future … you’ll have to come to the leadership through work, then the people will accept you cordially,” she said.

The AL president went on saying: “I want you’ll move with an ideology and take the country forward till 2041 … build up the country’s image alongside your own image.”

Sheikh Hasina said the attitude that BNP’s student wing Jatiyatabadi Chhatra Dal showed during the BNP-Jamaat rule or before it could not be done.

Recalling the glorious role of the BCL in country’s all movements, the prime minister said the organisation founded by Bangabandhu made important contributions to Bangladesh’s all movements and struggles.

She directed the BCL leaders and workers to read the books on Bangabandhu like ‘Asamapta Atmajiboni’ and ‘Karagarer Rojnamcha’ saying that: “You can learn good politics from these books.”

The AL president also urged them to work in unison for strengthening the organisation further. “You’ll have to put the organisation on a solid foundation and take decision unitedly through discussion,” she said.

Earlier, the BCL leaders greeted the prime minister by presenting her with a bouquet.