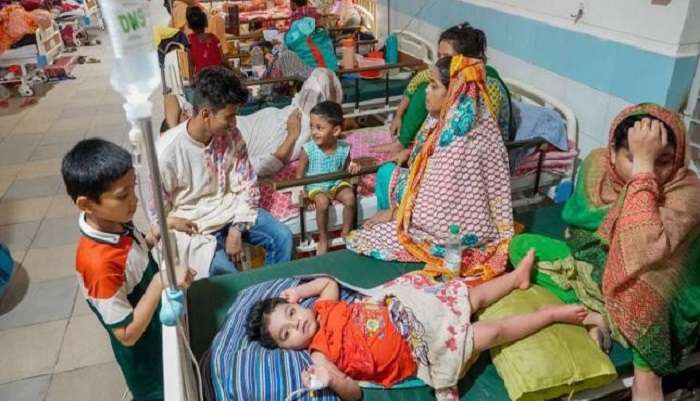 Two schoolgirls died of dengue in Dhaka and Kushita on Tuesday while the government said 615 new patients were hospitalised across the country in the last 24 hours until Tuesday morning.

Inspector Bachchu Mia of DMCH police camp said Tarin was hospitalised on April 12. “She died at the ICU around 2:45 pm,” he said.

Meanwhile, Juthi, a class-V student from Kushtia, died while being taken to Rajshahi Medical College Hospital (RMCH). The 11-year-old was the daughter of Joynal Ali of Naboganga village in Bheramara upazila.

Kushtia Civil Surgeon Dr Roushan Ara said Juthi was admitted to Kushtia General Hospital on September 13 with dengue. “But her family took her home before she had recovered,” she said.

On Tuesday, Juthi was taken to Bheramara Upazila Health Complex in a critical condition. Doctors suggested her family to shift her to RMCH but she died while being taken there.

Meanwhile, 615 new dengue patients were admitted to hospitals across the country in 24 hours till 8am. Of them, 198 were hospitalised in Dhaka, said the Directorate General of Health Services (DGHS).

About 2,485 patients are currently being treated at hospitals across the country, it said.

Since the beginning of this year, 82,454 people were hospitalised with dengue, most of them in Dhaka. Of them, 79,766 or 97 percent made full recovery.

DGHS data show 11,357 patients were infected with dengue in September while the number of patients was 52,636 in August.