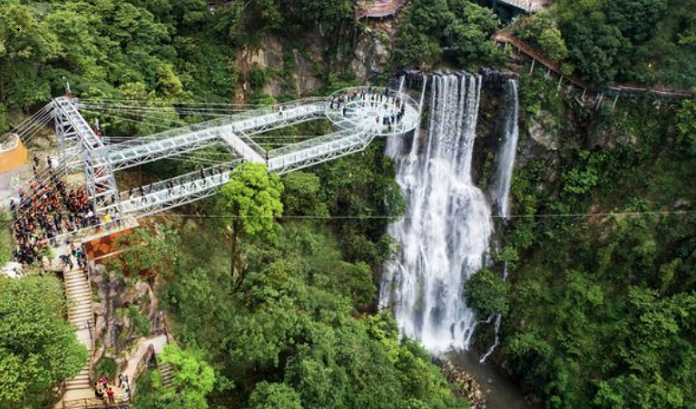 Tourists with nerves of steel have been taking on a terrifying bridge in China, which crosses over one of south China's prettiest valleys.

Oh, and did we mention it's glass-bottomed so there's no escaping the fact you're over 130m above the valley below?

Then there's the observation deck, which juts out 72m over a cliff edge, right by a roaring waterfall.

Basically, it's definitely not one for the faint-hearted.

The Skywalk is located in Qingyuan City, in the Guangdong Province, and it offers up some pretty spectacular views of the surrounding valley.

Measuring a total length of 202m, it's actually one of the world's longest glass skywalks, with 72m of it jutting out over the cliff edge.

The bridge has been designed so that the glass is as clear as possible, so you can take in unobstructed views as you make your way along.

Once over the bridge, you'll also find a circular observation deck with a diameter of 16.8 metres, overlooking a breathtaking waterfall and more of the valley landscape.

Of course it also aims to make tourists feel like they are floating above the landscape (it definitely isn't for you if you have a fear of heights).

It can make for a pretty incredible photo opp, and a few brave souls have been posing on the deck's edge (which is encased in a short glass panel wall) to get a snap of themselves with the surrounding landscape and waterfall in the background.

When it first opened to the public in June 2018, excited locals and visitors flocked to check it out, but it proved a little too scary for some who clung on to their friends and family as they nervously made their way back.

However it's reported that each piece of glass weighs 4.5 tons and can hold the weight of two vehicles, if that takes away any concern!