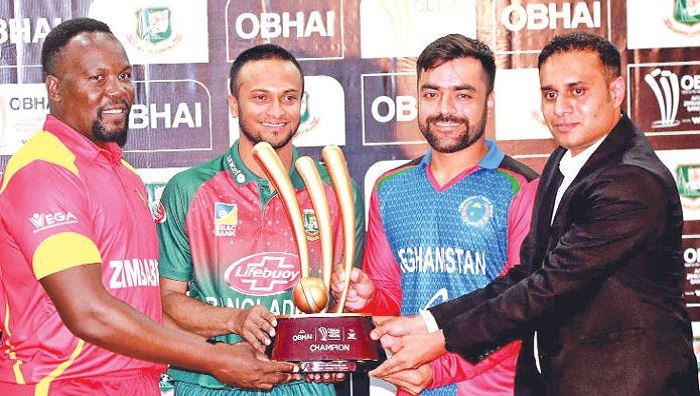 Bangladesh is eyeing to come out of their losing jinx as they gear up to take on Zimbabwe in the Tri-nation T20 series opener at the Sher-e- Bangla National Stadium (SBNS) in the capital on Friday evening.

Both Bangladesh and Zimbabwe will enter the T20I tri-series starting looking to put behind their recent disappointments.

The double-league basis tournament will take off at SBNS from 6:30pm.

Each team will face off each other twice in the tournament, hosted by Dhaka and Chattagram.

Tigers will get Afghanistan and Zimbabwe as their opponents in a bid to show their true credential when the pride is at stake after their recent performance dismal performance and only winning a trophy could rub off the pain.

Handed a suspension by the ICC over government interference of their cricketing affairs, which bars their participation in global events, Zimbabwe will be eager to let their cricket do all the talking.

After coming off with a humiliating Test defeat at the hands of Afghanistan, who over the times proves them stronger team than Bangladesh in shortest format of the cricket it is even tougher to claim to be firm favourites as the Afghans would come up as favourites in Tri-nation T20 series, largely because of their success in this format.

Afghanistan whitewashed Bangladesh in three-match T20 series, last time when the two sides faced off each other in Dehradun in 2018.

The Afghans played four T20 matches against Bangladesh and won 3 while they have taken on Zimbabwe 7 times in this format and won all of the matches. The stat itself suggested how strong they are in this format and outright favourite they would be to clinch the title, shattering Bangladesh’s hopes.

Bangladesh T20 success even against Zimbabwe is not noteworthy. The Tigers played 9 T20 against the Southern African nation and won 5 while lost 4. They have played a bilateral series in this format last time in 2016 in Bangladesh and the two-match series was drawn.

Both Bangladesh and Zimbabwe knew stat but the hosts, for the time being, wants to focus on Zimbabwe whom they meet tomorrow to kick-start the tournament.

Their main target is to get them back into the winning way first, largely because they are going through a perpetual defeat phase.

They have lost their last three Test matches in a stretch, lost last five ODIs in a row and even being beaten in their last T20 series also.

“It was the first Test match and I think Afghanistan played really well. So a lot of credit must go to Afghanistan. From the outside, I am getting understand how much is there, particularly with the Test side. And look at the record of Bangladesh, our Test record, I know lately it has been pretty good but the Test record is not that good. So there is lots of work to do regarding the structure the team started playing and trying to adapt,” Domingo told reporters ahead of the tri-nation adding that they are well aware that it is a different format so they need to play with a different mentality, allowing the pace to flourish.

“Absolutely, we will back the pace bowlers because it is totally different condition and different format and there is a World Cup in Australia so you need to place some fast bowlers, I think that’s really important,” he said.

“And with the World Cup everybody aware that in Australia and there is no doubt that you need to place some fast bowlers,” he added.