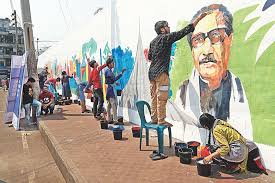 Ahead of the birth centenary of Father of the Nation Bangabandhu Sheikh Mujibur Rahman, a recommendation was made to install marble stones inscribing with Bangabandhu’s portrait, mural and his brief biography in all railways stations across the country.

The recommendation was made at the fifth meeting of the Parliamentary Standing Committee on the Ministry of Railways held at the Jatiya Sangsad (JS) Bhaban with its Chairman ABM Fazle Karim Chowdhury in the chair, said an official release here.

The committee also requested the ministry to expedite the construction of Dhirasramm Container Terminal in Gazipur. At the meeting, it was recommended to set up body scanners and luggage scanners at Dhaka and Chattogram railway stations for the safety of the passengers.

The parliamentary committee later discussed about setting up of body scanners and luggage scanners at all the district and upazila railway stations in phases.

Secretary of the Railways Ministry and other concerned officials were present at the meeting.