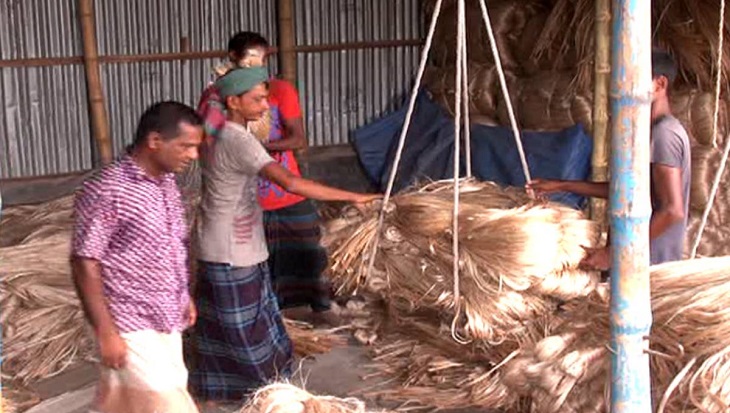 Better quality jute is being sold at maximum Tk 1,950 per maund, down from Tk 2,200 just before Eid-ul-Azha. Photo: UNB

Farmers in the district, which is known for growing the golden fibre in aplenty, have become disappointed after failing to get the fair  prices for their produce.

Although they got better prices at the beginning of the season, there was a gradual decline in the prices.

Visiting some jute markets, this correspondent found that currently better quality jute is being sold at maximum Tk 1,950 per maund, down from Tk 2,200 just before Eid-ul-Azha.

It was seen in famous jute markets of Kanaipur, Talma, Kadirdi and Satoir that jute is being sold at Tk 1,500-1,950 per maund.

Many jute farmers, including Atiar Rahman and Sirajul Islam of Chotul union under Boalmari upazila, said the production cost of per maund of jute was Tk 1,300-1,400 as the diesel price and labour cost were relatively higher this time.

They were counting losses as they were not getting fair prices for jute in comparison with the production cost, they lamented.

Besides, the growers are facing problems in rotting jute for lack of water. That's why the jute colour does not shine.

The farmers said they would have been benefited had they got prices ranging from Tk 2,200 to 2,500 per maund.

Mohsin Hossain, director of MH Golden Jute Mills Limited, said at the beginning of the season, they purchased jute at Tk 2,200 or more. “But not more than Tk 1,950 can be offered for the low-quality jute currently available in the market.”

“It would be tough for the growers to get fair prices if jute goods are not diversified,” he also said.

Kantik Chandra Chakrabarty, deputy director of Faridpur Department of Agricultural Extension, said this year jute was grown on a total of 82,990 hectares of land in the district with a production target of 181,930 tonnes.

Many growers were unable to rot jute in a better way for lack of water for which the colour of the jute did not come out good, and so the farmers are getting lower prices, he said.

Two varieties of jute -- Indian Tossa GRO 524 and local O-9897 -- are being cultivated in Faridpur district, the DAE official said, adding that of them 90 per cent is of the Tossa variety.