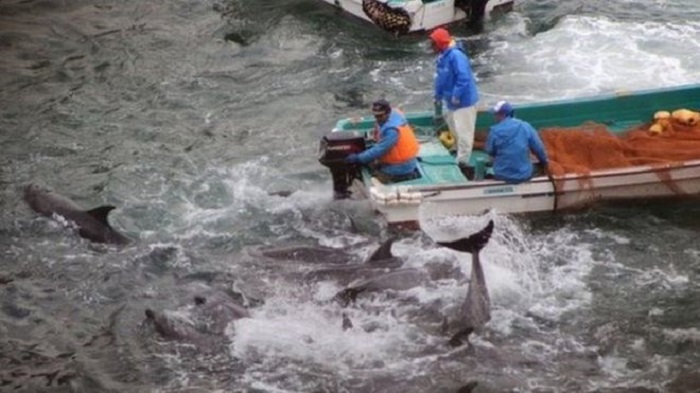 Japan has started its controversial annual dolphin hunt in the coastal town of Taiji.

The hunt sees the animals driven into a cove where most are slaughtered for their meat with knives in shallow waters.

Other dolphins are sold to aquariums and marine parks.

The Taiji hunt has been carried out for decades and gained global attention when it was the subject of the Oscar-winning documentary The Cove in 2009.

This year's Taiji hunt kicked off on Sunday, but according to Japanese media the boats returned without any dolphins.

According to environmentalist group The Dolphin Project, five Risso's dolphins were killed on Monday.

The overall quota for the season allows for more than 1,700 animals to be killed or captured.

Environmentalists say the drive hunt is extremely cruel and the dolphins can take up to 30 minutes to die by suffocation or drowning.

Yet the fisherman from Taiji say the community's livelihood is dependent on the trade.

The dolphin hunting season is expected to last for about six month.

Demand for dolphin and whale meat has been on the decline over the past years and both have been found to have unhealthy levels of mercury.

Animals caught alive and sold to marine parks fetch a far higher price than the meat yet there is growing pressure on the parks not to buy dolphins captured in Taiji.

Japan has already come under criticism this year for resuming commercial whaling after it left the International Whaling Commission (IWC).

Commercial whaling ships left port on 1 July this year and the first whales have already been killed and sold.

Under an IWC moratorium, whaling had effectively been banned since 1986.

Japan though had never fully stopped whaling - it has been conducting what it said were research missions killing hundreds of animals each year.