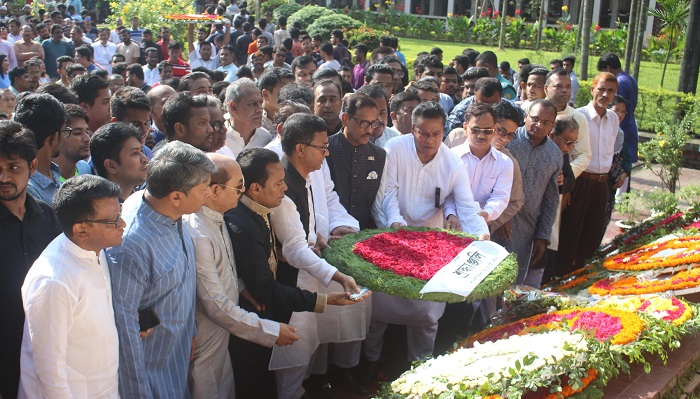 The 43rd death anniversary of national poet Kazi Nazrul Islam has been observed across the country with due respect, prayers and solemnity.

Different socio-cultural bodies, political parties and educational institutions observed the day by paying tribute to Nazrul and discussing his life and works.

The main programme was held at Dhaka University (DU) where the poet was laid to rest. The observance of the day started with Qurankhawani after Fajr prayers at DU Central Mosque.

Later, teachers, students and employees of the university and political and socio-cultural organisations placed wreaths at the grave of the national poet on Tuesday morning.

DU teachers, students, officers and employees assembled at “Aparajeyo Bangla” in front of Kala Bhaban at 7:00 am.

Later, they brought out a procession at 7:15am from there and proceeded towards the mazar of the poet adjacent to the university’s central mosque.

DU Vice-Chancellor Professor Dr Md Akhtaruzzaman led the procession to place wreath at the grave of the poet. A dua mahfil was also held seeking eternal peace of the departed soul of the rebel poet.

Later, a discussion was held on the mazar premises with Prof Akhtaruzzaman in the chair. Bangla Department Chairman Professor Bismadeb Chowdhury moderated the discussion.

As part of observing Nazrul's 43rd death anniversary, Quader along with party men placed wreaths at the poet's grave on behalf of his party around 8:30am.

He told journalists: "Kazi Nazrul Islam was the poet of humanity. He was a staunch believer in non-communalism and expressed it through his work.

"His [Nazrul’s] poetic language inspires us to fight against communal forces and practice humanitarian views," he said.

The Awami League leader said: "August is a month of woe for Bangalis. According to a BBC study, the best three Bangalis are Bangabandhu Sheikh Mujibur Rahman, Rabindranath Tagore, and Kazi Nazrul Islam. We lost them all in this month. We need to follow their ideals."

Besides, Ministry of Cultural Affairs, Bangladesh Shilpakala Academy and Nazrul Institute observed the day through various events. Bangla Academy organised a discussion in the afternoon on the occasion.

Nazrul’s death anniversary was observed in Cumilla also. The young poet visited the place in 1921. He met a young Hindu woman, named Pramila Devi. They fell in love with each other and got married on April 25, 1921.

People of all sections in the city paid tribute to the poet by placing wreath at Chetonay Nazrul monument at Cumilla Zilla Shilpakala Academy.

Kazi Nazrul was born on the 11th Joishtha in Bengali calendar year 1306 (May 25, 1899) in Churulia, near Asansol in the Burdwan district of West Bengal.

Famously known as the Rebel Poet, Nazrul was a lyricist, musician, revolutionist and philosopher. His poems and songs were a source of inspiration for the Bangali nation during the Liberation War in 1971, and all subsequent democratic movements and struggles.

Nazrul wrote nearly 3,000 songs and composed many of them, which are now known as Nazrul Geeti or Nazrul Sangeet.

Rabindranath Tagore dubbed him as Saraswati's bor-putra (the gifted son of the Goddess of learning), considering his impressive talent.

Nazrul was the poet of rebellion against injustice and taboos. His nickname was Dhukhu Miah (Mr. Sorrow). True to his name, Nazrul suffered a lot in his life.

Life of Nazrul was very eventful. He was a corporal of British Indian army. But he was against British colonial rule and encouraged people to wage movement. For his anti British writings, he was confined to jail. He also performed in the theatre.

After the independence of Bangladesh, Father of the Nation Bangabandhu Sheikh Mujibur Rahman brought Nazrul and his family to Dhaka from Kolkata, and ensured living arrangement with state honours.

Bangabandhu also provided a residence to the poet’s family in Dhaka’s Dhanmondi area.

In January 1976, he was accorded Bangladeshi citizenship.

The legendary Bangali poet breathed his last on Bhadra 12 in 1383 of the Bangla calendar – August 29, 1976 on the Gregorian calendar – at the then PG Hospital and now Bangabandhu Sheikh Mujib Medical University (BSMMU) Hospital in Dhaka.

According to a wish he had expressed in one of his poems, the poet was buried beside a mosque on the Dhaka University (DU) campus.