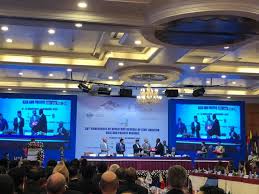 The conference was held on 19-24 August in Kathmandu of Nepal where a Bangladesh delegation led by Mafidur Rahman attended, the release said.

Nepal civil aviation authority director general Rajan Phokhrel was also elected as the chairman of the conference, the release continued.

Bangladesh will host the 571h DGCA Conference, which will be held at Dhaka in 2020.

In this regard, a video clip was presented during the 56th DGCA Conference and a stall was decorated displaying all Bangladeshi items to promote the country’s aviation activities, which was vastly appreciated by ICAO and delegations attended the conference.