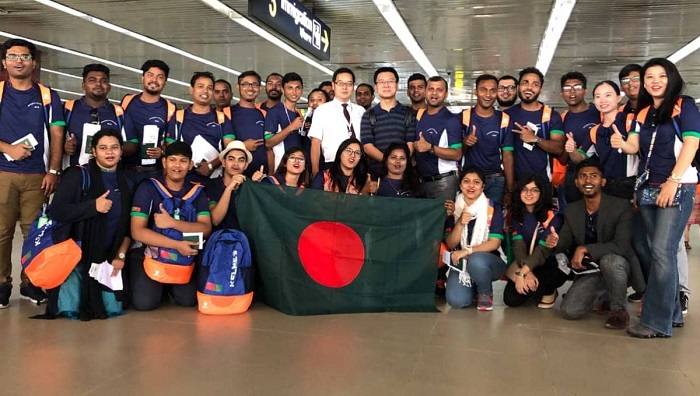 A two-week-long Bangladesh-China Youth Camp begins in China’s Yunnan on Monday for the third time, aiming to strengthen people-to-people contact and cultural bonding between the two countries.

A 158-member Bangladesh youth delegation will take part in the Bangladesh-China Youth Camp 2019, said Zha Mingwei, Attache at the culture section of the Chinese Embassy, Dhaka.

The first team, comprising 74 Bangladeshi youths, reached Kunming on Sunday afternoon while the second one, comprising 84 young people, will join them on Monday, the official said.

The Chinese Embassy in Dhaka says this year’s youth camp is just as “exciting and interesting” as usual.

During their visit, the young people will go to see the tranquil and beautiful capital city of Kunming, the charming ancient town of Dali, the diversified ethnic cultures as well as the warm and welcoming people in Yunnan.

Apart from the scenic views, there will be lessons on the Chinese language, Chinese calligraphy and Chinese martial arts, and an experiencing session in local primary and middle schools arranged by Yunnan University, said the Embassy.

Before the departure of the first group, newly-appointed Chinese Ambassador to Bangladesh Li Jiming said young people are not only the future of a country but also the source of power that drives the Bangladesh-China relations forward.

He thinks communication among the younger generation is a key part of people-to-people exchanges between Bangladesh and China.

The Chinese envoy hoped that the participants would make greater efforts to contribute to the friendship between Bangladesh and China.

In 2016, during Chinese President Xi Jinping’s visit, he had a “fruitful” meeting with Prime Minister Sheikh Hasina and witnessed the signing of a series of cooperation agreements, including the plan to invite 600 Bangladesh youths to visit China in the next four years.

Between 2017 and 2018, there were already 300 of them who visited China under the youth camp, according to the Chinese Embassy.

Some of the previous participants studied Chinese language, and have been granted scholarships for further education in China.