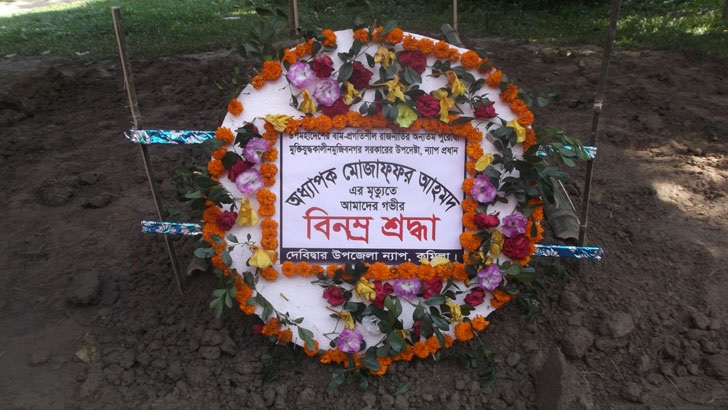 Muzaffar Ahmed, who was part of the wartime Bangladesh government in exile and a close friend of Bangabandhu Sheikh Mujibur Rahman, laid to rest at his village home at Alahbad of Debidwar in Cumilla on Sunday.

He was buried after Zohr prayers. Earlier, his fourth namaz-e-janaza held at the courtyard of his house at Elahabad.

Muzaffar, the chief of National Awami Party’s (NAP), died at a Dhaka hospital on Friday. He was 98.

The third namaz-e-janaza was held at Cumilla Town Hall ground at 10 am.

His body was taken to Cumilla on Saturday night, a day after his death at a hospital in Dhaka. The 98-year-old was suffering from old age complications.

Prof Muzaffar was part of the wartime Bangladesh government in exile and a close friend of Father of the Nation Bangabandhu Sheikh Mujibur  Rahman.

The first namaj-e-janaza of Muzzaffar was held on the South Plaza of Jatiya Sangsad Bhaban at 11:00am on Saturday where state honours was given.