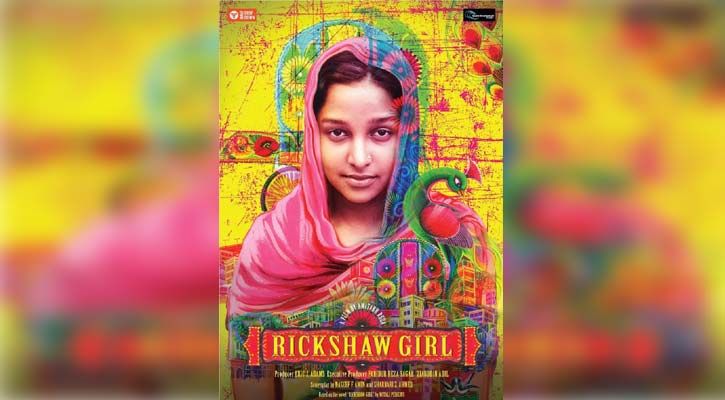 Renowned filmmaker Amitav Reza Chowdhury is going to gift the viewers with his new movie ‘Rickshaw Girl’ after ‘Aynabazi’.

The first official poster of the movie has been released on August 25 which was made after Indian writer Mitali Parkings’s best seller book “Rickshaw Girl”.

The colourful poster portrays a dark face of a restless teen with many untold stories.

The charm floats in the face of a rickshaw girl called Naima in the movie is known as Navra Rahman.

The shooting of the movie was done at different locations of Dhaka and Gazipur. In the Gazipur film city, hundreds of slum rooms were made for the shooting.

The movie has been produced by Eric James Adams. Faridur Reza Sagar and Jiauddin Adil were executive producers were. Nafis Faruk Amin and Sharbori Johra Ahmed wrote the script.

In this regard, Amitabh Reza Chowdhury said, “In ‘Rickshaw Girl’, we have tried to create the movie in such a way that the production may succeed in international arena and the name of Bangladesh is highlighted.”

“Rickshaw Girl poster was unveiled on Sunday. The face of a fearless girl is shown on the poster. The story of the movie traverses the unknown path of a character”, Amitabh added.