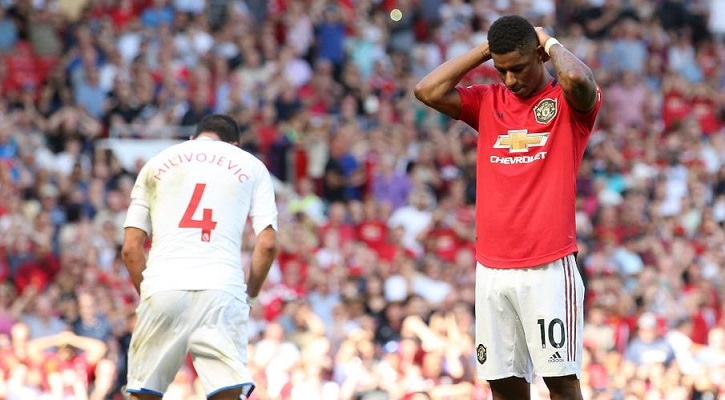 Patrick van Aanholt scored a dramatic injury-time winner as Crystal Palace ended Manchester United's unbeaten start to the season and burst the bubble of optimism that manager Ole Gunnar Solskjaer had been trying to create with a shock 2-1 victory at Old Trafford on Saturday.

It was a horror moment for United goalkeeper David de Gea as he allowed van Aanholt's powerful shot to slip through his grasp and creep into the net to secure Palace's first league win over United for 23 matches and their first at Old Trafford since December 1989.

The Dutchman's goal came after it looked like Daniel James had rescued a point with an 89th-minute equaliser and saved the blushes of Marcus Rashford, who missed a penalty as United suffered more problems from 12 yards.

The last few days had been dominated by the fallout of Paul Pogba's failure against Wolves on Monday and whether he should have stepped up instead of Rashford, who had scored from the spot against Chelsea on the opening day.

Five days after Pogba's miss cost United two points in the 1-1 draw at Molineux, the Frenchman stayed well away, leaving Rashford to take the responsibility but he missed a penalty for the first time in his career as the ball came back off the inside of the post.

In a match they were expected to win comfortably against a Palace side that had not scored in their opening two games of the season, United had begun brightly.

The opening goal seemed sure to come from James when the ball ricocheted invitingly to him ten yards out, only for van Aanholt to make a goal-saving block as he diverted it past the post.

It had been one-way traffic, so there was a real sense of shock as Palace took the lead with their first shot of the game.

Jeffrey Schlupp beat Victor Lindelof in the air to a long clearance from goalkeeper Vicente Guaita and Jordan Ayew raced clean through and slotted his finish past De Gea to equal his tally of Premier League goals from last season.

Wilfried Zaha, the Eagles' wantaway star player, could have put the visitors two up moments later but he was denied by De Gea from a tight angle, as Palace muscled their way through United's defence.

As the Red Devils tried to respond, Anthony Martial was brought down just outside of the area by former Chelsea captain Gary Cahill on his Palace debut, but referee Paul Tierney deemed the offence was only worthy of a yellow card and declined the use of VAR to see if a goalscoring opportunity had been prevented.

Martial was then certain he had been held back by Martin Kelly as he spun in the box and tried to shoot, so there was disbelief when a penalty was not given by Tierney or VAR.

Following Rashford's aberration from the spot, he was convinced he should have been given another chance as he went down in a tussle with Kelly, but again VAR was not in United's favour.

James provided the moment of quality the hosts were searching for with a fine curling finish into the top corner just when it appeared they had run out of time.

But as they went for the three points, they were undone by van Aanholt's sucker punch.