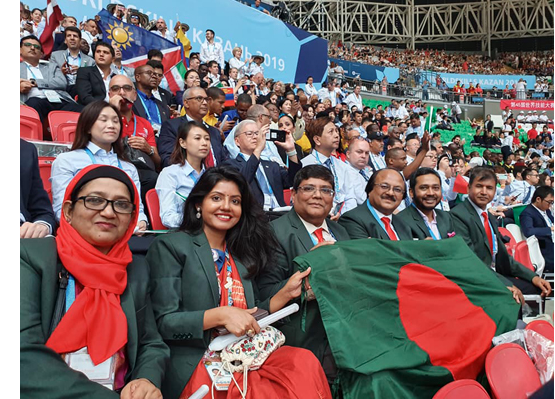 Bangladesh, for the first time, has made its footsteps in global skills through the participation of two of its contestants at the ‘Kazan WorldSkills Competition 2019’ along with 1,354 competitors from 63 countries and regions across the globe.

The four-day competition, the 45th of such an event where participants in 56 skills are contesting, was inaugurated on August 23, 2019. Besides, there are 3500 volunteers, 200,000 visitors and 1300 experts who have gathered at the Worldskills village in Kazan, Russia, said a press release here today.

Tanjim Tabassum Islam is contesting the global skills competition in confectionery and patisserie trade and Nafisa Sadaf Achol in fashion designing. They were selected through the nationwide Rising Star Competition last year.

While sharing his excitement through social media, Fauque Hossain said, “Our competitors are doing well. They have been making satisfactory performances in global skills. Both of the competitors have done well on the first day.”

“Many visitors to the site took advantage of the guided excursions, while others took their time meandering through the clusters and halls. Some of the most visually beautiful categories included patisserie and confectionery, hairdressing, and floristry. One of the most popular skill areas on the first day was restaurant service, where a selection of guests, volunteers, and team officials were given the opportunity to be served a variety of food and beverages by the competitors,” he further wrote.

“The WorldSkills Kazan 2019 opening ceremony was absolutely incredible,” he said, adding, “Tanjim and Nafisa are working hard with their respective trades,” he added.

Kazan was awarded the right to hold the event in 2015, after a vote of WorldSkills members. WorldSkills Russia works in all 85 regions of the country and is one of the priority projects for the federal government in the field of personnel training and economic development.

On 23 August, the second edition of the Summit for Ministers, who are in charge of vocational education and training in their countries, kicked off as part of WorldSkills Conference 2019.

The ministers from more than 40 countries arrived in Kazan to participate in the summit. During the busy two-day business programme, they deliberated on the most advanced approaches to the workforce training system excellence.

It will also generate reliable data on the national systems’ efficiency allowing relevant adjustment of national policies and state support programs based on the resulting rating.