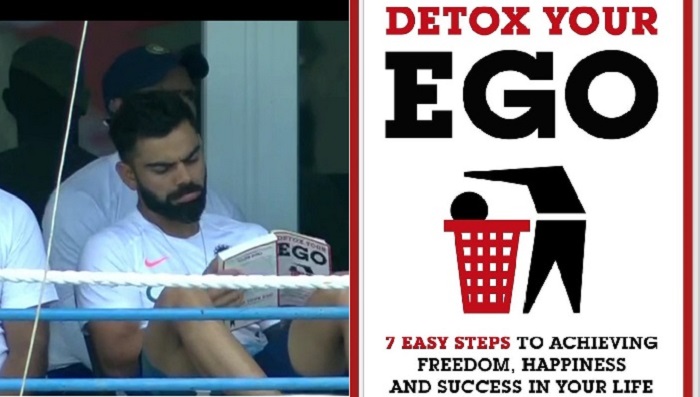 Virat Kohli might not have had the best of outings in the first innings of the ongoing opening Test between India and the West Indies at the Sir Vivian Richards Stadium, North Sound in Antigua but continues to make headlines.

Despite registering a rare failure, the Indian skipper is still grabbing eyeballs, not for his cricketing exploits but for his reading choice.

During India's innings, Virat Kohli was seen reading -- the book of his choice: "Detox Your Ego: Seven Easy Steps to Achieving Freedom, Happiness and Success in Your Life" by Steven Sylvester.

The picture quickly spread like wildfire on social media with fans coming in their numbers to have their say on their matter.

Virat Kohli was dismissed for nine in the first innings on Day 1, falling victim to West Indies pacer Shannon Gabriel.

While Gabriel lacked Kemar Roach's persistent accuracy, his extra pace continued to challenge India's top order and brought him the reward of Virat Kohli's wicket when the champion batsman attempted to guide a lifting delivery through backward-point only for debutant Shamarh Brooks to take a tumbling catch at gully.

West Indies found themselves in heaps of trouble when a late burst by fast bowler Ishant Sharma earned him a five-wicket haul and saw the hosts being reduced to 189 for eight at the close of the second day.

Ishant Sharma ended the day with five for 42 off 12 overs, figures which were enhanced considerably in the final half-hour of a long day when he was single-handedly responsible for the home side losing three wickets for five runs to tilt a fairly even contest very much in favour of the tourists.

He dismissed Shai Hope, Shimron Hetmyer and Kemar Roach in the space of 13 deliveries to change the complexion of the West Indies innings from the relative comfort of 174 for five.

Captain Jason Holder will therefore only have Miguel Cummins and last man Shannon Gabriel potentially for company on the third morning with India pressing for what could be a significant first innings advantage.