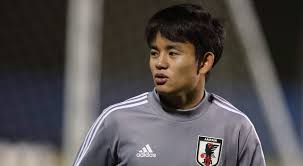 Madrid signed Kubo, who has been dubbed the "Japanese Messi" in his home country, from FC Tokyo in June but have allowed the teenager to leave to gain experience.

"Real Madrid and RCD Mallorca have agreed to the loan of Takefusa Kubo for this season until June 30, 2020," Real Madrid wrote in a statement.

Mallorca added: "The Mallorcan is one of the great talents of world football and stands out for his daring and his great quality with the ball at his feet.

"Kubo speaks Spanish perfectly after coming through the academy of FC Barcelona and at 18 he is an international with Japan."

Kubo will train with his Mallorca teammates for the first time on Friday, ahead of the team's second La Liga game of the season at home to Real Sociedad on Sunday.

The newly-promoted club began with a 2-1 win over Eibar last weekend.

After joining Barca's academy aged 10, Kubo returned to Japan in 2015 as a result of FIFA sanctions handed to the club for breaching rules on signing under-age players.

Barca kept tabs on the attacking midfielder but Real Madrid jumped in this summer with an offer of around 2 million euros.

Kubo made his international debut for Japan against El Salvador in June.