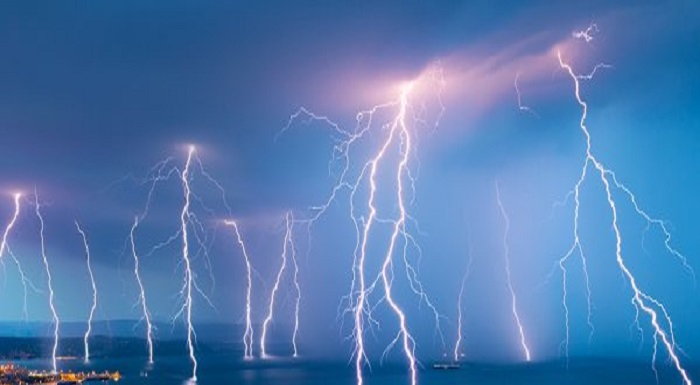 In Faridpur, a thunderbolt struck Hashi Begum, 45, wife of Idris Ali, while she was cooking at Kagdi village of Saltha upazila in the morning.

Besides, Billal Matubbor was killed by a lightning strike while he was working in his paddy field along with his son at Bata village in the same upazila, said officer-in-charge of Saltha Police Station Md Delwar Hossain.

In Bagura, three people including husband and wife were killed and two others injured in separate lightning incidents in Sariakandi upazila.

The deceased were identified as Amirul Islam, 45, his wife Feloni Khatun, 38, resident of Dakatmara char area of Kornibari union of the upazila and Sumon Mia, 32, son of Tahsin Ali, of Char Batia village of the same upazila.

In Manikganj, Chandra Sarkar, 55, a farmer of Mouwali village of Ghior upazila, was killed as a thunderbolt hit him while he was taking bath in a pond.

He was declared dead when he was taken to Ghior Upazila Health Complex.

In Magura, Alik Biswas, 35, son of Arun Biswash, was killed in lightning strike at Nalda village of Sadar Upazila around 3 pm.

Office-in-charge of Magura Police Station Sirajul Islam said a streak of lightning struck Alik when he was working in a field, leaving him dead on the spot.

In Patuakhali, Matiur Rahman Farazi, 65, son of late Dhalu Farazi, resident of Haridevpur village in Gazalia union of Galachipa upazila, was killed in lightning strike at 6:00am.

Besides, 10 other people were injured by a lightning strike in Sreepur upazila.

In Sirajganj, Duita Sheikh, 55, son of Jasim Uddin, of Chandpur village in Brammogasa union of Rayganj upazila, was killed in lightning strike.

In Jamalpur, two people were killed in separate incidents of lightning strikes in Madarganj upazila.

The deceased were identified as Sorwar Hossen, 15, son of Titu Mia, resident of Khilkathi village in Jorkhali union of the upazila, and Russel, 22, son of Goni Mia, of Chargolabari village of the same area.