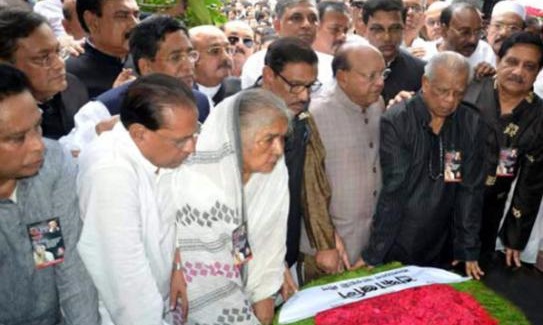 Awami League (AL) will go to the Supreme Court to seek capital punishment of BNP acting chief Tarique Rahman over the case of Aug 21 grenade attack.

AL General Secretary Obaidul Quader came up with the disclosure while responding to a question at an event marking the 15th anniversary of August 21 grenade attack in Dhaka on Wednesday.

He said, “The Aug 21 grenade attack was carried out under the direction of Tarique Rahman. He is the mastermind of the attack. We’ll definitely submit a writ petition to the SC to seek highest punishment for him.”

A total of 24 people were killed and many others injured when a total of 13 grenades ripped through the rally of the then opposition party at Bangabandhu Avenue on Aug 21, 2004.

He said, “Harkatul Jihad chief Mufti Abdul Hannan in a confessional statement said that they carried out the attack under the direction of Tarique Rahman. So, the mastermind behind the attack should get the capital punishment.”