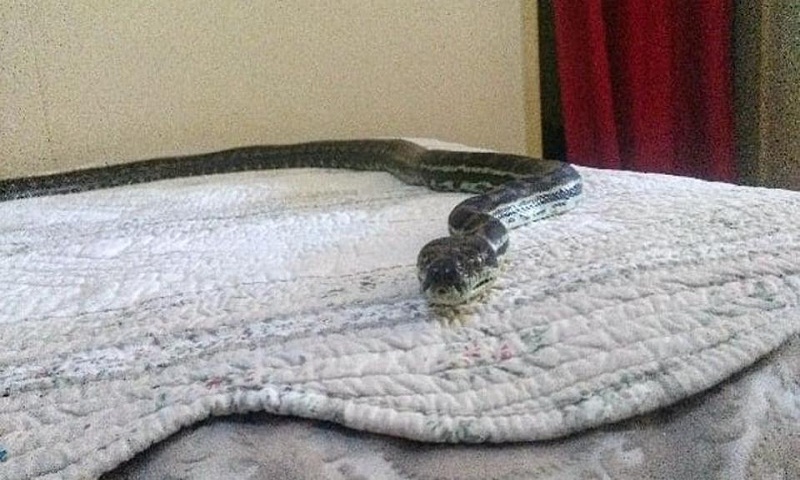 Imagine lying down on your bed after a tiring day and, in those brief moments before drifting off to sleep, you notice a huge snake on your ceiling. Or worse, imagine that snake falling off the ceiling suddenly. Makes you shudder, right? Well, this Facebook post shows just how much of a reality this scenario could be for the residents of this home in Queensland, Australia. The post, shared by Sunshine Coast Snake Catchers 24/7, details how a huge Carpet Python fell off a light fixture on the ceiling onto the bed. The post, complete with pictures of the snake chilling on the bed, may leave you feeling uneasy.

According to the post, the snake had been relaxing on the light fixture when it gave way because of the weight of the reptile. The python fell and landed right on the bed. Thankfully, no one was on the bed at the time - but one can only wonder what would have happened if someone was there.

Experts were called in to handle this scary situation. “The snake looked pretty comfy on the bed when we arrived,” says the post.

The post, since being shared a day ago, has collected 800 reactions and more than 130 shares. Several people have shared comments about this incident.

“And this is why, as much as I want to, I could never live in Australia,” says one Facebook user. “Just saw this after getting into bed! I’ll be having nightmares!” says another. “Now I will keep on looking at the lights,” says another.

In an incident last month, a woman sleeping in a hotel room woke up to a scary surprise - a snake on her arm. Facebook user Melinda Major shared her experience on the social networking site and it’ll probably make you uncomfortable about your next stay at hotel, reports Hindustan Times.