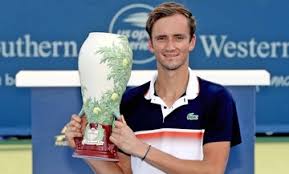 The ninth-seeded Russian finished with an ace after saving break points in the final game, lifting a first Masters 1000 trophy after settling for runner-up finishes to Nick Kyrgios in Washington and Rafael Nadal in Montreal last weekend.

“I didn’t have one bad match, I hope to continue this way for next few weeks.”

After his full-on post-Wimbledon schedule, the winner admitted: “I’m so exhausted, I almost can’t talk now.”

He also revealed that he was starting to cramp in the final game, when he tossed his racquet in anger before saving break points.

“I think my Montreal final against Rafa was important,” he said of hanging on. “I was maybe able to use that experience that I had and David did not.”

Medvedev, who only recently gained the ATP Top 10, now will find himself ranked fifth as a result of his three-week run of form.

“I don’t check the rankings every two minutes, but I do look after I do well at a tournament,” he said. “If I had lost I’d be seventh, now I’m fifth.”

He has the most match wins on any surface this year with 43.

Spanish superstar Nadal, who did not play this week — is second with 41, followed by Roger Federer on 39.

Medvedev stamped himself a contender for the US Open, the final Grand Slam of the season that starts in Flushing Meadows in a week.

Goffin was competing in his second final of 2019 after losing to Federer in Halle.

“Congratulations to your team,” he told Medvedev, “Once again, an unbelievable week for you, fantastic.

“I think you are ready for New York.”

Medvedev powered to a 4-1 lead in the opening set but had to win it in a tiebreaker as Goffin, coached by 2002 Australian open winner Thomas Johansson, fought back.

But Medvedev’s break in the opening game of the second set was all he needed as he avenged a loss to Goffin at Wimbledon this year.