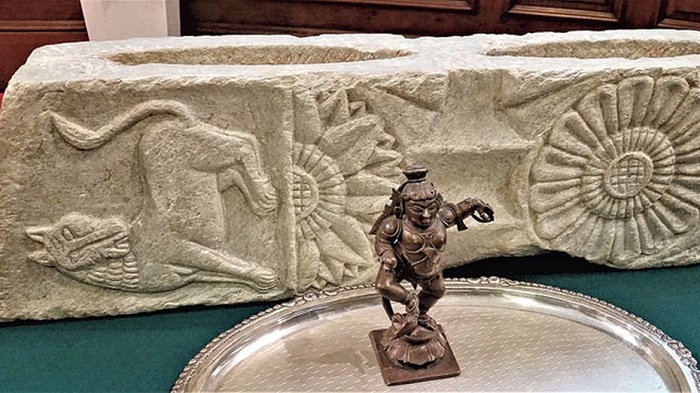 Two allegedly stolen art treasures were handed over jointly by America’s department of homeland security and Scotland Yard to the Indian high Commission in London on the occasion of India’s independence day.

After the traditional flag hoisting ceremony, the Indian high commissioner Ruchi Ghanashyam unveiled them in the Gandhi Hall of the diplomatic mission.

She described the return of the artefacts to India as “a warm and friendly gesture” by the UK and US agencies and commented: “We cannot put a monetary value on these artefacts as they are indeed priceless.” Some aspects of the affair still remain shrouded in mystery.

A collector in the UK who had the two items got in touch with the US embassy in London and voluntarily handed them over.

Although the New York art dealer Subhash Kapoor was not mentioned by name, it seems the two items are linked to him.

Once a respected art dealer in New York, he is currently wanted in America where the Manhattan district-attorney’s office has filed criminal charges against him and seven co-conspirators, charging them with operating a $145 million smuggling ring that dealt with thousands of looted antiquities over a period of 30 years.

American officers, who had flown to London, for Thursday’s ceremony at the Indian high commission gave a brief outline of the case.

So did a senior spokesman for Scotland Yard’s art and antiques unit who said that the trade in stolen cultural objects is highly profitable and that the criminals involved “are not bound by national boundaries”.

He added: “The artefacts being returned are more than pieces of stone and bronze. They are religious objects with deep significance to the people from whom they are stolen.”

“We have been delighted to have been able to assist our Indian and American colleagues to return them.

“I would like to appeal to people who have information about cultural heritage to come forward and speak to police.”

In a statement given to The Telegraph, the Homeland Security Investigations department appeared to refer to Subhash Kapoor: “The two artefacts from India are linked to one of the most prolific art smugglers in the world, who was recently charged in Manhattan.

“An individual in the United Kingdom who possessed the items came forward to Homeland Security Investigations expressing a desire to surrender the pieces. In June 2019, working with the Metropolitan Police Service, the individual cooperated and turned over the artefacts to authorities.

“Both items will be physically examined by domain experts at a later date to establish their exact period and original location. The repatriated artefacts are just two of more than 2,600 antiquities that have been recovered around the world.”

One further problem remains with objects returned to India. Quite a few of them have “disappeared” into a bureaucratic black hole back in India and are never seen again, as disclosed to The Telegraph by a peer who had a hand in securing the return of Gandhi memorabilia.