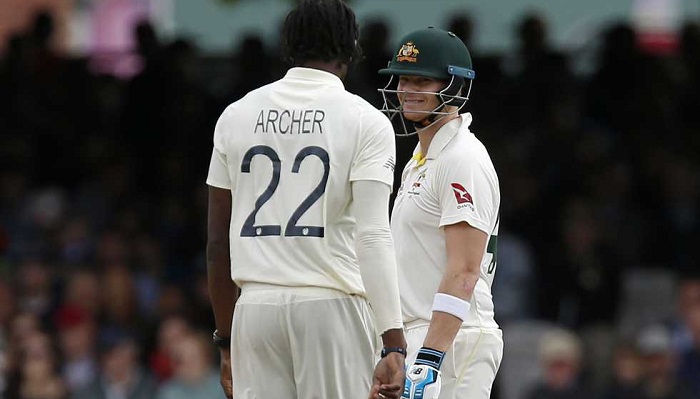 The second Ashes Test is poised for a thrilling conclusion after a memorable fourth day in which the fast bowlers of England and Australia illuminated Lord's.

In a ferocious spell in which he touched 96mph, England debutant Jofra Archer struck Steve Smith on the neck and forced the world's best batsman to retire hurt on 80.

Smith returned 40 minutes later but, clearly shaken, shouldered arms to be lbw to Chris Woakes for 92 as Australia were bowled out for 250 - eight behind.

Pat Cummins used his own pace to remove Jason Roy and Joe Root in successive balls and, although Rory Burns and Joe Denly steadied England, both fell to Peter Siddle.

At the end of it all, England scraped to 96-4 - a lead of 104 - leaving all four results possible in a Test where the entire first day and most of the third were lost to rain.

To be out of danger, England will probably need to bat beyond lunch on Sunday.

But it may also be that their best chance of winning is to run through an Australia side chasing a low target, potentially without Smith, who, as well as being hit on the neck, required an X-ray on his left arm.

The finale will be played out on a pitch that is showing increasing signs of uneven bounce and in front of a sell-out crowd with the weather set fair.

After England were heavily beaten in the first Test, Sunday could see them back in the series, or the Ashes as good as gone.

Lord's has witnessed some incredible cricket this summer: the astonishing World Cup final, Ireland bowling England out for 85, and Jack Leach making 92 as a nightwatchman.

This ranks alongside them all and served as a perfect example of how exhilarating Test cricket can be when ferocious bowlers produce pace that rattles even the best batsmen.

The battle between Archer and Smith was sporting theatre, with the sickening blow suffered by the former captain leaving a previously baying crowd in worried silence.

The next act was Smith's surprising return, with Cummins then bringing his own fire and celebrating as if the Test was on the way to being won.

As England battled to stay afloat, the drama grew through two David Warner dropped catches and two lbw appeals from off-spinner Nathan Lyon that should have been given but were not reviewed.

In gathering gloom that necessitated the use of the floodlights, Ben Stokes and Jos Buttler doggedly took the lead past 100 and left the match hanging in the balance.

Until lunch, it seemed inevitable that the prolific Smith would nudge, shuffle and occasionally drive his way to his third century in as many innings and put Australia into the lead.

That was all changed by Archer, who not only provided the pace that England have so badly needed in their previous battles with Smith, but also proved that the anticipation surrounding his entrance into Test cricket was worth the hype.

Archer had been worked over by Cummins when batting on the second day and dished out his revenge here. First he had skipper Tim Paine caught at short leg before striking a blow to Smith's forearm which required the X-ray but did not cause a fracture.

In the next four balls he faced from Archer, the uncomfortable Smith played three uncontrolled hooks and almost fended to short leg. From the fifth, the horrible impact to the neck forced him from the field.

When Smith was cleared by medical staff to make his return, Archer was out of his attack, but the batsman was clearly not himself. From the second ball he faced, he swiped Woakes into the leg side and, after a classical back-foot drive, edged another four.

Final proof that Smith was rattled came when his usual impeccable judgement failed, leaving him to play no shot to a straight ball from Woakes that would have hit middle stump.

Even if this day will mainly be remembered for the Archer-Smith battle, it was still one that Australia had the better of, first by moving from 80-4 to virtual first-innings parity, then by taking four wickets in the evening session.

Paine and Cummins made useful contributions of 23 and 20 respectively before Cummins hurtled in after tea.

Roy offered a leading edge which Cummins slid to take and, from the next ball, Root edged to Paine.

Burns and Denly added 55, the former gritty and latter occasionally loose. Denly was dropped on seven by Warner at first slip off Siddle, while Burns should have been given leg before to Lyon on 24.

Whereas Burns added only five more before got a lifter from Siddle that he edged behind, Denly took his score to 26 by the time he tamely patted back to the same bowler.

At 71-4, England were in real danger, but were seen through by Stokes and Buttler. Still, Stokes was dropped at slip on six by Warner and escaped being lbw, both off Lyon.

What will happen on the final day?

England's Chris Woakes on BBC Test Match Special: "We have got 98 overs tomorrow so more time than you think.

"It's hard to put a number on it but we have got to bat sensibly. We have two guys at the crease who can accelerate quickly so the morning session will be crucial."

Former England captain Alec Stewart on TMS: "Absolutely even stevens at the moment. England need to be batting at lunch - can they get a 250 lead before bowled out?

"For that to happen Stokes and Buttler need to play like we haven't seen them bat so far in this series. Stokes was as bad as I have seen him play today but the good thing is both frontline batsmen are still there."

Ex-England captain Michael Vaughan on TMS: "England can get another 100. But they could lose four wickets inside the first 30 minutes and it could be Australia are chasing 150."