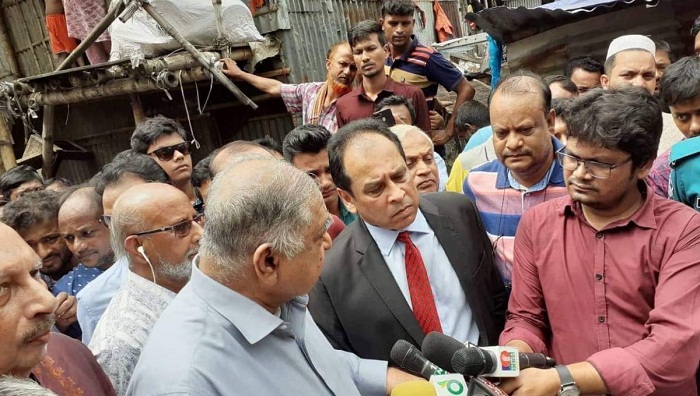 Gano Forum President Dr Kamal Hossain on Saturday urged the government and social organisations to come forward in aid of the victims of Friday’s fire at a slum in the city’s Mirpur-7 area.

“Thousands of people are living under the open sky without food, shelter and clothes in a dengue-hit city following the fire. I call upon the government and the social organisations to immediately stand by them,” he said.

Dr Kamal, also the convener of Jatiya Oikya Front , came up with the remarks while visiting the fire-ravaged slum.

He voiced deep concern over the repeated fire incidents at different slums. “How many more times do we need to watch one fire incident after another? When will people have the right to live safely?”

Dr Kamal talked to the fire victims and consoled them. “I’m extremely shocked. I pray to Allah to give them the patience to withstand the pain and sufferings.”

Party general secretary Dr Reza Kibria assured the victims that their party will stand by them.

He said their party’s a team, led by its presidium member AMSA Amin, will look after the fire victims.

The massive fire that broke out at the slum on Friday evening was doused by firefighters early Saturday, after six hours of their hectic efforts.