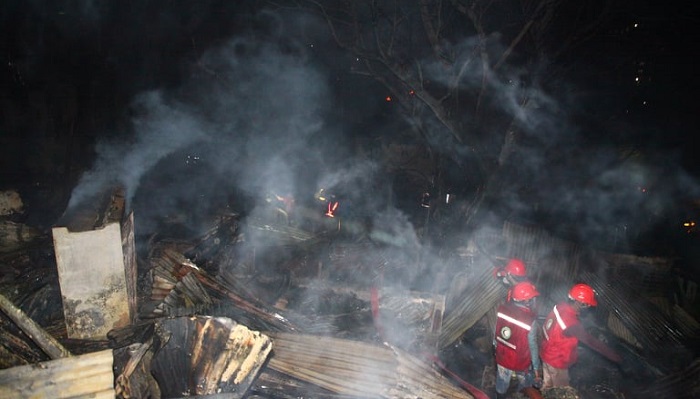 Rupnagar slum fire that gutted about 3,000 shanties, has been brought under control around 10:30 pm on Friday night after over three hours’ frantic efforts of firefighters.

Ershad Hossain said the fire broke out near Chalantika intersection on Milk Vita Road around 7:22 pm this evening and it brought under control around 10:30 pm.

Initially, 15 firefighting units rushed to the spot to control the fire, later nine more units join them as the intensity of the fire was increased, he added.

Though it was not estimated yet, locals supposed that around three thousand shanties made of bamboo, wood, plastic and tin-sheets were gutted.

At least four persons injured in this fire incident and they were taken to hospitals for treatment but no casualties were reported immediately, reports media.

The blaze also engulfed adjacent buildings, including a mosque and hospital of BGMEA. The devotees inside the mosque were rescued unhurt.

Sources said slum at Chalantika intersection behind the Rupnagar Police Station housed about 1,000 families in about 3,000 shanties. Most of the dwellers are apparel workers and they were enjoying the Eid vacation at their native villages.

According to slum dwellers, the fire broke out around 7:15 pm. The civic service lines were cut off.

Being informed, the fighters of the Fire Service and Civil Defence (FSCD) rushed to the spot and tried to douse the blaze with the assistance of local people.

At least 24 units of the FSCD worked to bring the flames under control, but they faced difficulties due to narrow lanes inside the slum.

The law enforcing agencies, including police, took position around the slum to maintain law and order situation there.

And the law enforcers protected the valuables of the slum people they rescued risking their lives.

The residents of the adjacent houses moved from their residences with their valuables and cash in fear of fire.

Meanwhile, strong wind extended firefighters struggle to bring out the blaze under control.

The actual reason behind the fire could not be known, but the electric short circuit was blamed.

Locals said the dwellers use hitters and bottled gas for cooking as there is no gas connection to the slum.

Besides, there was another allegation of afire the slum intentionally was shrouded among the locals.

Mayor said that he would discuss with the local lawmakers and councilors how to feed the affected people of the slum and to rebuild their residences. He assured that the DNCC would provide treatment expenditures to the wounds.

MP Elias Molla told locals that he would look into the incident to find out whether the fire was an accident or sabotage. He also urged the Prime Minister to extend her support to the affected slum dwellers.