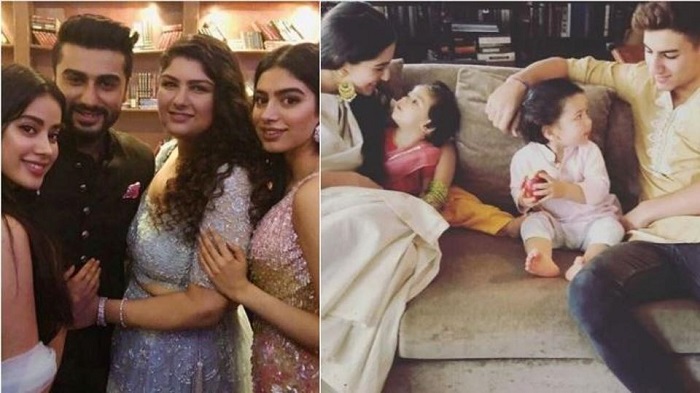 This year on Raksha Bandhan, we have brought the best treat for all Bollywood fans. From Arjun Kapoor to Abhishek Bachchan, Bollywood is full of sweet brothers who love to dote on their sisters. While we are sure that these brothers are all excited to celebrate Raksha Bandhan with their sisters on Thursday, we bring you a little something to cherish the bond they share with each other. Check out the five cutest siblings of Bollywood.

While the siblings came close only about a year ago, they are still one of the most beloved family of Bollywood. When Janhvi and Khushi’s mother and actor Sridevi died in February last year, their half-siblings Arjun and Anshula proved to be a big pillar of strength and support for the girls.

During his appearance with Janhvi on Koffee With Karan last year, Arjun talked at length about his sisters and what they mean to him. “A moment changes everything, I have been through that moment, I wouldn’t wish it on my worst enemy. I and Anshula did everything out of pure honesty because we knew that we would have needed somebody at that time. We couldn’t have that but that doesn’t mean Janhvi and Khushi shouldn’t. My mother would have wanted that. If she was alive, the first thing she should’ve said is, ‘Go be there’. Don’t hold any grudges; life is too short,” he had said.

Sara and Ibrahim share a large age difference with their half-brother Taimur but their affection for him is for anyone to see. While Sara and Ibrahim are Saif Ali Khan’s kids from first wife Amrita Singh, Taimur is his son from second wife Kareena Kapoor.

Sara had shared an adorable picture with Taimur last year on Raksha Bandhan as well. “To be honest, I don’t get to see Taimur very often, but every time I do, he’s a bundle of happiness. When Taimur is happy, the whole room is happy. He is my blood and the source of my father’s joy,” she had told a magazine in an interview earlier.

Actor Abhishek Bachchan and his sister Shweta Bachchan also share a strong bond. While they love to pull each other’s leg or tease one another on social media, they are still always there for each other during tough times.

During their joint appearance on Koffee With Karan last year, Shweta talked about how much bullying her brother has to face online. She had said, “I also know the heartbreaks and I think I know it really, really well. I see their faces when things don’t work out. I’m there on a human level. I am on Instagram, I see the amount of hate and trolling he gets. And whether or not you like him as an actor, or you think that he has had it so easy because he is Amitabh Bachchan’s son, whatever it is, I’m his sister. I’m going to react to him as a sister. And I hate it, it gives me sleepless nights. I don’t want yet another member of my family to be in this business because of a selfish reason,” she said.

There are few people that Salman Khan loves as much as he loves his sister Arpita. He is often seen playing with her son Ahil and just showering her with all the affection in the world. Talking about how her husband and actor Aayush Sharma and Arpita broke the news of marriage to him, he said, “We brothers wake up late. And all such proposals came early in the morning. We were (that time) making a film titled My Punjabi Nikah, that’s still under production. So we were looking for a new boy. After a month Sohail said ‘I’ve seen a guy in the gym. He is the ideal casting for My Punjabi Nikah.’ I said that’s great, let’s sign him. But then that guy simply vanished and reappeared after three months. We met that guy (referring to Aayush Sharma) at our home when our sister (Arpita) brought him and said I want to marry him. We agreed, and then Sohail told me, ‘remember I told you about that boy at the gym for that film? He’s the boy!’ I said ‘great, now our film will be made for free.’ So nepotism doesn’t suit him!”

Saif Ali Khan and his sister Soha are the children of late cricket player Mansoor Ali Khan Pataudi and veteran actor Sharmila Tagore. They share a special bond with each other and love to chat about books and politics.

Saif’s wife Kareena Kapoor had earlier talked about the relationship he shares with Soha. “I have rarely been intimidated by anyone and this the media knows. But if there’s one person in the family I am completely in awe of, it is Soha. I’m always a little nervous when I am having dinner with Saif and Soha, I’m like, ‘Oh my God I am never going to understand this conversation,” she said.