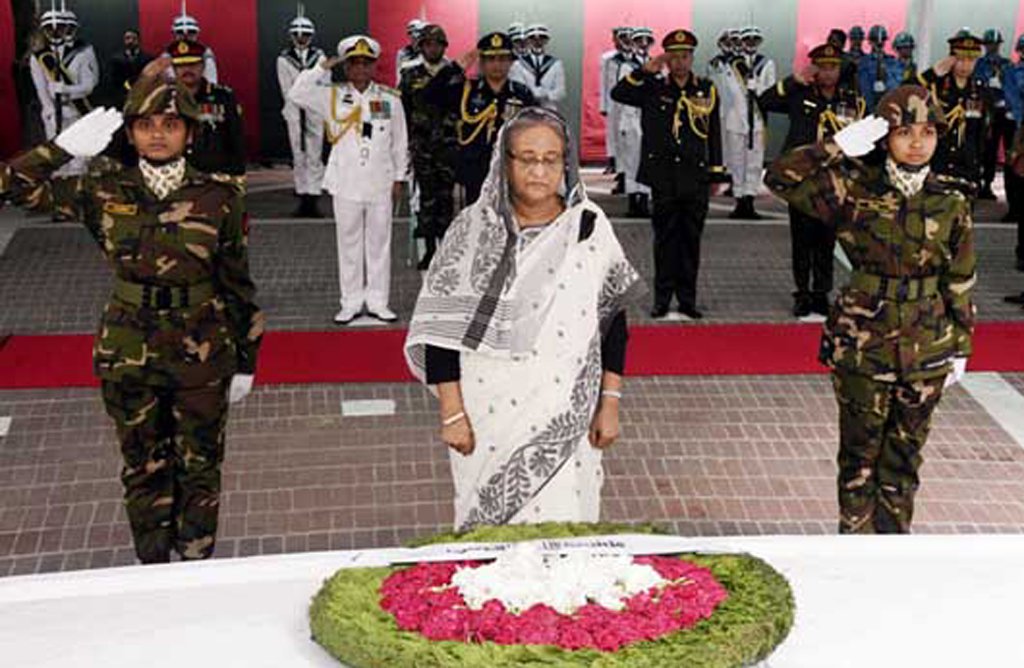 Prime Minister Sheikh Hasina on Thursday morning paid tributes to Father of the Nation Bangabandhu Sheikh Mujibur Rahman at his mazar here on the occasion of his 44th martyrdom anniversary and the National Mourning Day.

After placing a wreath, the Prime Minister stood in solemn silence for some times as a mark of profound respect to the memory of the architect of independence who was killed by a cabal of disgruntled army men on August 15, 1975 along with most of his family members.

A smartly turned out contingent drawn from the three services gave a state salute on the occasion, while bugle played the last post.

The Prime Minister then offered Fateha and munajat seeking eternal peace of the departed souls of the Father of the Nation, Bangamata Begum Fazilatunnesa Mujib and other martyrs of August 15, 1975 massacre.

Prayers were also offered seeking continued peace, progress and prosperity of the nation.

Later, flanked by Awami League senior leaders, Sheikh Hasina, also the ruling party’s President, placed another wreath at the mazar of Bangabandhu on behalf of the party.

Speaker Chaudhury and Chief Whip Noor-E-Alam Chowdhury also paid homage to the Father of the Nation by placing wreaths at his mazar separately.

The Prime Minister, along with cabinet members and party leaders joined a milad and dua mahfil on the mazar premises marking the National Mourning Day, organised by the Cabinet Division and Gopalganj district administration.

Earlier, Sheikh Hasina arrived in Tungipara, the ancestral home of Bangabandhu, by a helicopter after placing wreaths at the portrait of Bangabandhu at Dhanmondi 32 in Dhaka as part of the national programme marking the National Mourning Day.

The Prime Minister also went to the Banani graveyard and spread flower petals on the graves of the martyrs of the August 15 carnage and offered fateha and joined a munajat there.