Child among two die of dengue in Pabna, Faridpur 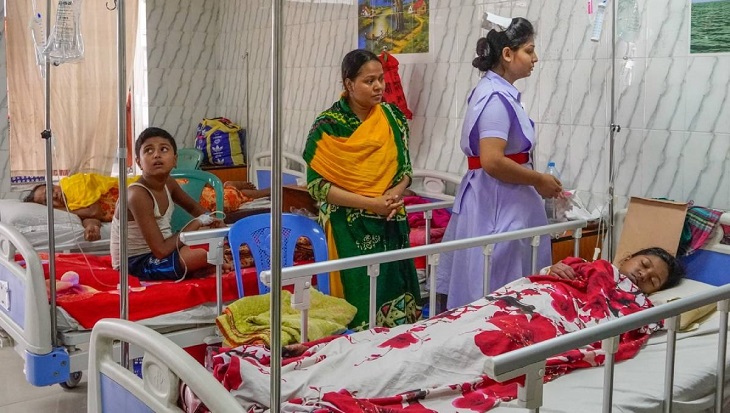 Two people, including a nine-year-old boy, died of dengue in Faridpur and Pabna districts early Wednesday and Tuesday.

The deceased were identified as Tanjid Mollah, 9, son of Jahid Mollah of Madhukhali upazila in Faridpur and Musabbir Hossain Mahfuz, 20, son of Golam Mustafa of Chak Ramanandapur village in Pabna Sadar upazila.

Dr Ranjan Kumar Dutta, assistant director of Pabna General Hospital, said Mahfuz was admitted to the hospital with dengue on Tuesday afternoon. He breathed his last around 12:30am.

Currently, 46 dengue patients are undergoing treatment at the hospital, the doctor said.

In Faridpur, Tanjid died at Faridpur Medical College Hospital around 11 am on Tuesday.

Confirming the death, Dr Kamada Prasad Saha, director of the hospital, said Tanjid was admitted to hospital on Sunday and diagnosed with dengue.

At least 1,880 new dengue patients were admitted to hospitals across the country in 24 hours till Wednesday morning.

Currently, 4,143 patients are undergoing treatment at 40 government and private hospitals in the capital.

Another 3,726 patients are being treated at hospitals outside Dhaka.

Although the government has so far confirmed 40 deaths, unofficial estimates suggest a higher death toll.