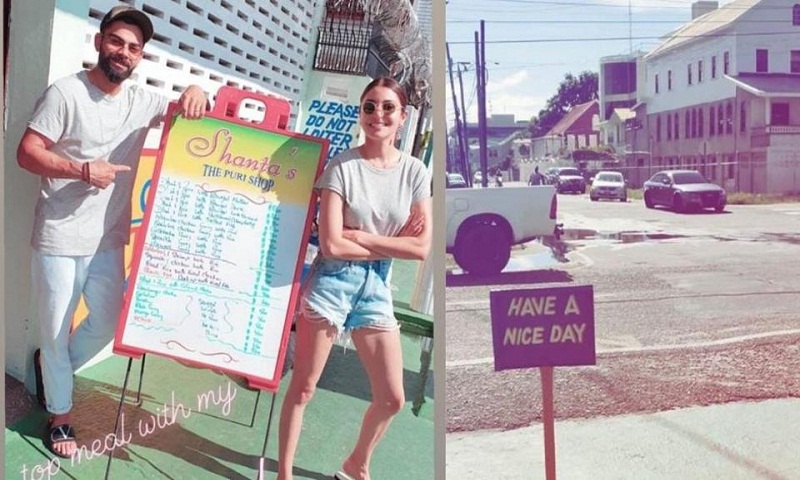 Actor Anushka Sharma and Virat Kohli are currently in West Indies where Virat is leading India in a series against the West Indies. The couple ventured out during a break and have shared pictures on social media.

Virat shared a picture with Anushka from their lunch outing on his Instagram stories and captioned it, “top meal with my lovely.” The couple look excited to have found a desi Indian food outlet and can be seen grinning in the picture. Virat, dressed in casuals and a cap points out to a board that read ‘Shanta’s - The Puri Shop’ while Anushka is all smiles to the camera and looks stunning in a tee and denim shorts.

Anushka, too, shared pictures from the city, showing placards of ‘Have a nice day’ placed in the parking zone and captioned it, “Have twice a nice day or night!”

India whitewashed West Indies 3-0 in the T20 matches and will now be up against the Caribbean side in the three-match ODI series, starting August 8.

Anushka recently opened up about her married life in an interview to Filmfare. Talking about how they sometimes see off and pick each other at the airport, Anushka had said, ”Those are the moments you steal when you lead lives that are so demanding. For that, your priorities have to be set. I’m never going to be like, ‘Oh please spend more time with me at the cost of your work’. No, please do your work. He’s the same with me. When you respect each other’s work and your own, there’s respect in the marriage.”

Anushka had earlier accompanied Virat to the UK for the Cricket World Cup, reports Hindustan Times.