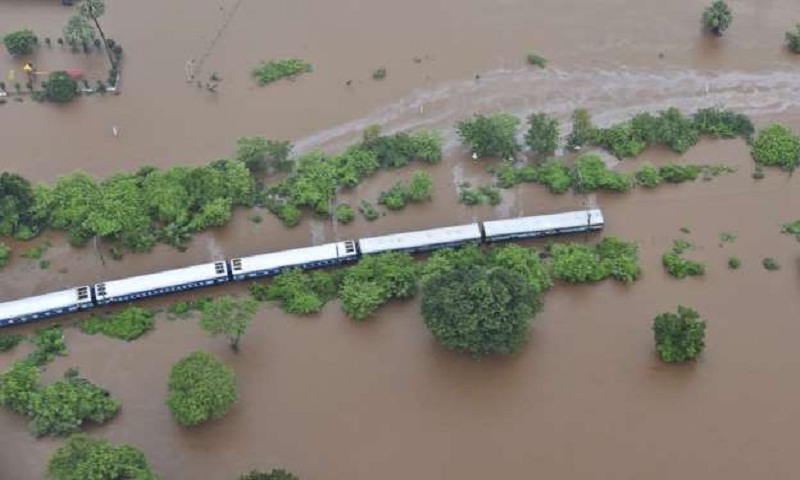 Over 1,000 passengers, including nine pregnant women, on the Mahalaxmi Express which was stranded for nearly 18 hours in heavy flood waters, around 90km from Mumbai, were rescued in a massive, multi-agency operation by Saturday afternoon, officials said.

Central Railway chief spokesperson Sunil Udasi said 1,050 passengers were safely evacuated without injuries from the train, which was stuck near Vangani, while the State Disaster Authority pegged the figure at 1,200, in what became the biggest joint operation in the state by the Indian Air Force, Army, Navy, the NDRF, state police, the Railway Police, local agencies, NGOs and volunteers since the July 26, 2005 floods.

Besides, seven Indian Navy teams of divers with specialised equipment, Seaking and MI-17 helicopters of the IAF, and two columns of Indian Army from Mumbai already in Thane and two more en route, were deployed for the massive operations. Union Minister of State for Home Nityanand Rai called up Chief Minister Devendra Fadnavis and offered all help from the Centre.

The rescue operation picked up pace post-noon when rain subsided a little, enabling quicker movement of personnel and the evacuated passengers carrying their luggage and minor children to safer spots.

Many weary passengers attempted to walk, but when they, especially the senior citizens, lost strength, police and other rescuers promptly hoisted them on their shoulders and took them to safety.

A few local villagers, many of whom were also stranded in the flood waters, also ventured out to help the train passengers early in the day before the official rescue teams from Mumbai, Thane and Pune reached the venue.

The passengers were brought off the train into boats and taken to a small village around 1.5km away where the villagers welcomed them with water, hot tea and biscuits and even carried their luggage and the kids.

From there the passengers boarded buses, tempos and smaller vehicles to go to Badlapur, 7km away. A fleet of ambulances with three dozen doctors including gynaecologists were deployed there to tackle any emergency.

The Central Railway then ferried the rescued passengers by a local train to Kalyan where a 19-coach special train was kept ready to take them to Kolhapur, famed for its Mahalaxmi Temple. A railway official also said that the authorities were also ready to take those passengers who so wanted back home to various destinations in Mumbai.

In Thane, around 550 people stranded in the towns of Kalyan, Dombivali, Badlapur and Titwal were also saved from the flood waters by the rescue teams till this evening. Thane Guardian Minister Eknath Shinde took a boat and went on an inspection tour of the affected areas in Vangani and its surroundings.

The busy Mumbai-Goa Highway was blocked this afternoon after a landslide near Khed. There are no immediate reports of any casualties.

Mumbai Airport operations suffered with cancellation of 11 flights and nine diversions early on Saturday, but the situation returned to normal by 9am, official sources said.

Heavy rain lashed Palghar, Pune and Nashik on Saturday, with the IMD forecasting similar weather for the next couple of days in the entire coastal regions including Mumbai, reports Khaleej Times.